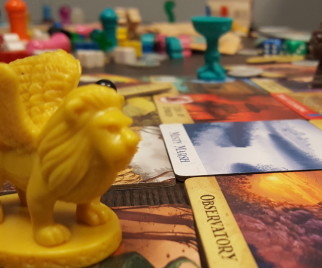 Quantic Foundry, a game analytics consultancy, recently took a full 220,000 videogamers and studied their motivations. The results were obvious in retrospect: People choose games based on their personality. In other words, gamers who are extroverted like games with competition and community, while people who are conscientious play games that allow them to concoct grand master plans and set them in motion.

QF ultimately created a database of 1300 games, which shows you the motivation of the players who play them. In other words, it’s the world’s most awesome game discovery tool.

Now QF wants to study your motivations once more. Only instead of videogames, it’s honing in on tabletop games.

QF, which has partnered with Coalition Game Studios, would like you to fill out a five-to-seven minute survey, which will measure what you love about sitting around a table with your very best future enemies.

You’ll be given a series of questions and asked to rate them by their importance. You’ll also be asked which gaming elements you like or dislike. For example, some people may consider a solo mode “extremely important” while finding immersion in another time and place is “not important at all.”

After you complete the survey, QF will sort you like a hat into four categories: conflict, strategy, fantasy, and social fun. Gamers with, say, high conflict scores like to attack other players and steal resources, while gamers with high strategy scores enjoy planning and deep-diving into rule books.

But each motivation has a secondary motivation. So gamers who enjoy conflict may also take pleasure in bluffing and even manipulating the other players.

Also, QF’s “profile tool will generate a personalized report” that will chart your motivations, which you can choose to share with your friends…

…But only if you’re a “social fun” board gamer. A gamer who likes conflict and manipulation will obviously keep their information to themselves, because they know knowledge is power. Even if you don’t.