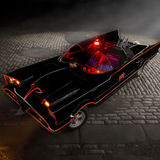 Holy automobile replica! You can own this Batmobile for $500K

Batman’s high-powered vehicle has taken many forms since its first appearance in 1939. But the first car to grab the public’s imagination and KAPOW! it was the 1955 Lincoln Futura, modded for the 1966-1968 television show to suit the world’s greatest detective. The Batmobile made an even greater impression on fan Rick Champagne. So when the vehicle came up for auction on January 19, 2013, he purchased it…for $4.2 million.