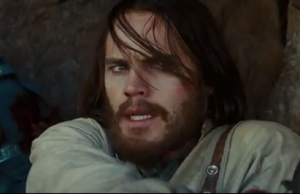 Ten minutes of the upcoming Disney movie—presumably the first ten minutes—of John Carter has been released, and I’m happy to see that it’s remained somewhat true to its source material, A Princess of Mars by Edgar Rice Burroughs. In fact, I think the humorous editing improves upon the original (although some fans might not care for the emphasis on action).

If you’ve read Burroughs’ novel you’ll know that the foreword is a letter from the author himself. In it, Burroughs describes how he came into possession of the writings of his uncle, John Carter, a.k.a. Uncle Jack. Carter narrates the rest of the tale, about how he came to Mars and his otherworldly adventures there.

In the footage, we see a young and wide-eyed Burroughs. We see a grizzled Carter, a gold prospector who is quick with his gun, his fists, and his, um, forehead. We see a movie that Cowboys and Aliens aspired to be.