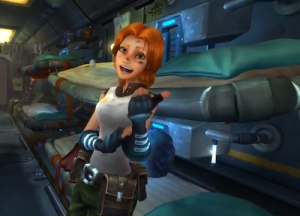 NCSoft has released two videos describing the “paths” (classes) that players can choose: the soldier and the explorer. The soldier can can kill. And rescue. And assassinate. And conquer. And more. The explorer, too, has multiple ways of achieving his/her objectives. (Can you say “jumping puzzles?” Can you say, “Wheeee!” as you invariably fall down from the highest heights and pancake the ground below with your corpse?)

The third video gives you an overall look and feel, thanks to the overly enthusiastic, not-so-bright urchin who serves as narrator. Her chatter and her penchant for violence—not to mention her grubby appearance—makes her seems like a character straight outta Pandora. And I loved those characters, particularly Claptrap, who turned a killfest into a laughfest.

According to NCSoft, “WildStar takes place on the planet Nexus, a mysterious world vacated by the ancient Eldan, but left rich with technologies and treasures to explore and acquire.”

According to me: The graphics aren’t as lovely as Guild Wars 2. But the cute cartoon style is easy on the eyes. And a good science fiction MMO is always welcome.