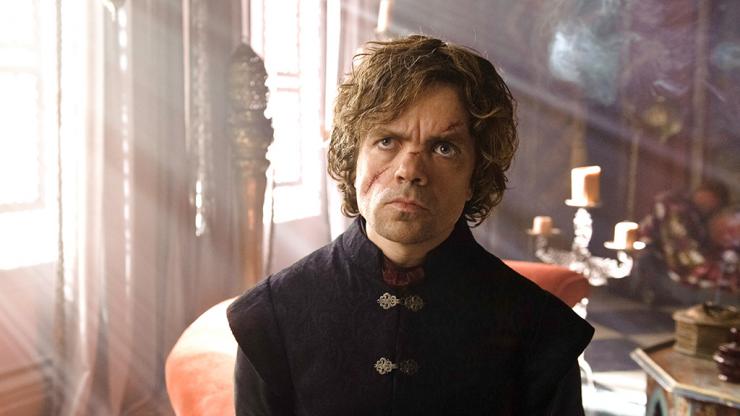 How do you know you are addicted to George R.R. Martin’s A Song of Ice and Fire series, the novels that are being played out on HBO’s Game of Thrones?

You know the fates of characters who are alive and well in season three–but not for long. You’re really pissed off about the exclusion of certain characters from the TV series (Strong Belwas!). And you’re counting the months, nay, years between installments. So yes, you’re addicted, and aren’t we all.

But if you were lucky enough to have attended the World Science Fiction Convention in San Antonio, Texas, last weekend, you could have had a nice dose of methadone.

Martin read another chapter from his upcoming novel The Winds of Winter. This chapter is from the point of view of everyone’s favorite imp, Tyrion.

Although no one was allowed to record Martin’s reading, a member of the audience, Joseph Nobles, transcribed it as best he could, then went back to summarize what he remembered. It’s not Martin’s work, per se, but this transcription gives us a window into what we missed … as well as something to look forward to when Martin eventually releases the book.

For those of us who don’t want spoilers, here’s a tidbit for you: Tyrion admires a depraved scene etched into man’s armor.

For those of us who do like spoilers, well, here are a few, thanks to Nobles.

As we know from A Dance with Dragons, Tyrion and Ser Jorah Mormont have joined the mercenary group, Second Sons. In this scene, the Second Sons are fighting on the side of the Yunkai against Meereen.

You can find the link here.

The Winds of Winter still has no release date.