A First Look at ‘Fable: The Journey’ for the Xbox Kinect 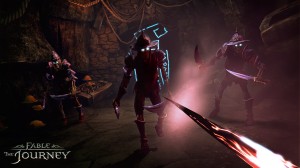 When Gary Carr, the creative director for Lionhead Studios played Fable: The Journey (FTJ) on the Kinect, he played like a tai-chi master or even like Mickey Mouse as the Sorcerer’s Apprentice. He waved his arms in fluid, yet precise movements to destroy the enemies of Albion. The Kinect wasn’t as responsive to me as it was to him (more on that in a minute), but when it works, the player is both lovely and deadly.

Carr took on multiple Hollow Men (reanimated corpses) at once by employing different gestures. These included thrusting his right arm forward to cast a spell and crossing his left arm in front of him to shield himself from attacks. Halfway into the fifteen-hour game, he unlocked a spell that was more than one way to skin an enemy: He could split a ball of fire so that it rained red death on his enemies.

He also eliminated more than one Hollow Man in a way I can describe as either “unsettling as hell” or “comic mischief,” depending on your sense of humor. With a swoop of his hands, he grabbed them and removed their heads and arms, so the only thing they could do is kick you to death. (Insert your own Monty Python and the Holy Grail joke here.)

Carr said, “We wanted to make a game that supports Kinect that can weave and cast magical spells that feel cool when you use your hands instead of pressing buttons. We don’t just remap gestures where buttons would have done a perfectly good job.”

That goes especially for the non-combat segments of the game, where you need to drive your horse across different terrain, as well as care for it. Stroking my horse made me feel calmer and happier, as if interacting with a real pet. Strangely, it felt better than it did when I fed my Nintendog by tapping it with a stylus. (It’s good for the horse, too. Caring for it will level it up so that it becomes more brave and can take more damage.)

It seems as if Lionhead Studios has listened to the critics of Fable III, who complained about overly simple gameplay and a lack of emotional connection to the character. Here, the gameplay is exciting, and my relationship to my horse is sweet.

So why do you need to take down Hollow Men and drive around Fable’s world of Albion? It’s all part of the fight against the Corruption. You play Gabriel, “a feckless everyman…separated from his tribe. He’s not a hero, but he becomes one.”

Gabriel spends some of his time on the road with a friend and fellow traveler, who introduces us to the world by way of a chatty conversation.

(The dialog seemed well-written enough, until I overheard a line where our friend said he missed “the good old days.” Good old days, spent fighting the enemies of Albion on and off for five hundred years? Perhaps he’d never played Fable before.)

You learn about magic from Theresa of the Spire, a mysterious character from the previous Fable games. Carr said, “We tell her story in this game and how she’s managed to live for five hundred years. She guides you and teaches you new abilities” (i.e., gestures and voice commands).  You’re going to need them, because Albion’s fate rests on your shoulders.

It turns out, I needed a guide as much as Gabriel. I’m left-handed, and the controls, which had fine-tuned themselves to Carr’s movement, didn’t want to play nice. (Carr believes this won’t be a problem for people playing on their home device.) I had also tried to play while standing up; it turns out that sitting down is easier for the Kinect to recognize.

But when it did work–mostly during a pre-game demo and when driving the horse, where handedness wasn’t an issue–it felt absolutely wonderful, the way magic should feel like.

Even with a wonky Kinect, I was engaged by FTJ, and I wanted more. FTJ seems not only full of action but also full of charm. And the ability to feel like I’m weaving spells with my hands? That was magic.