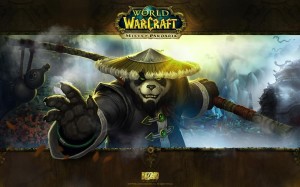 World of Warcraft (WoW) is the standard by which other MMOs are judged. But as it happens, I only just started playing MMOs, and I chose Guild Wars 2 (GW2) as my entrée. But WoW’s latest expansion, The Mists of Pandaria (Pandaria), was released today. With the help of Warcraft aficionado, Marco Lemos (who helped me with my article, “A ‘World of Warcraft’ Player Reviews ‘Guild Wars 2‘”), I spent some time giving the Pandaria beta a whirl, to see how it compares to my standard, GW2.

I can see the appeal of Pandaria. GW2’s lack of end-game material can give some players no sense of completion, and I can see where gameplay might feel repetitive after a few months. With multiple expansions and dungeons, Pandaria is, in the best possible sense of the phrase, a work in progress.

However, I ultimately prefer GW2. Here’s what Marco and I liked, and didn’t like, about Pandaria compared with GW2.

What I liked about Pandaria

– The starting level gameplay is incredibly simple—some would say too simple. But in Pandaria, it was much easier to learn how combat worked. GW2’s gives your character multiple abilities in the beginning, which were difficult to keep track of because I was too busy fleeing from centaurs. I learned quickly, but still, Pandaria is the better choice for beginners.

If I could rewind time, I would first buy Apple at $5 per share. And then I would have started my life as an MMO player with WoW. Only after that would I have moved on to GW2.

– The quest text and dialog are extremely well written, and they perfectly capture the right tone to motivate the player. Master Shang flattered me with, “Most of the other trainees have been here for quite some time, but you are able to match them even within this first hour.” These helpful prompts made me want to keep playing, and they really did give me a sense of attachment to my character—something that GW2 did not do.

– I was also more engaged with the plot. At one point, two of our companions fell out with each other over a turtle (<–vague spoiler), and their fight, though brief, made me feel like I was part of the story. The plot also moved along at a good pace.

– Raiding areas will have a staggered release date, starting today and going through November 6. This way, players can pace their gameplay. GW2, on the other hand, hasn’t breathed a single word about releasing new content.