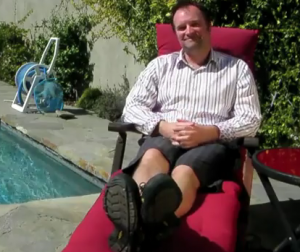 Actor David Hewlett, who starred as the lovably grouchy Dr. Rodney McKay on Stargate: Atlantis for five seasons–and most recently appeared in Rise of the Planet of the Apes–has been a busy working actor since the late 1980s. But lately, he hasn’t been employed as much as he would like. So how does he spend his time?

Probably very much like he does in the below video.