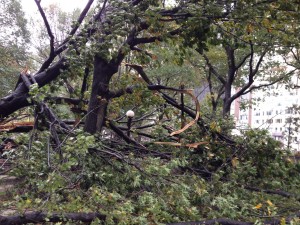 October 30, 2012, 3:31 pm: In the relatively elevated neighborhood of the Upper West Side, downed trees line most of the streets. Near the Time Warner Center, a bus signpost, which had snapped at its base during the worst of Hurricane Sandy, lays on the pavement. There is debris, but compared to other neighborhoods, not devastation.  And unusually, business is as brisk as a holiday shopping weekend. Grocery stores such as Zabars, Fairway, and the West Side Market are currently abuzz with activity, and there are long waits at local restaurants.

Wait, let me amend that: Business is booming for the few businesses that are actually open.

Most of the shops in this affluent neighborhood were closed–such as our many cupcake bakeries–as well as the chain stores, like Starbucks and Home Depot. There are as many stores open in this neighborhood during Christmas as there are in the aftermath of a hurricane.

The stores that have managed to open are an eclectic blend of what makes the Upper West Side my favorite neighborhood: the obvious (liquor stores), the odd (a shoe store on Broadway), and the adorable (a flower store on Amsterdam).

But seeing the haircutting salon open was a bittersweet experience. Bitter, because Hurricane Sandy caused the deaths of thirty-eight people, and an unknown number have lost their homes. Seven and a half million customers are without power across fifteen states. Sandy may have done $20 billion’s worth of damage. Sweet, because it means that economic recovery has already begun.

Because the subways and trains are out of commission, and buses will be resuming a limited schedule after 5pm, stores that are open should be seeing a great deal of foot traffic. But if they’re not open, they’ll be missing the chance to lure in customers who would usually be spending their day at the office.

How overworked are the employees manning the Upper West Side? When I thanked the cashier at Barney Greengrass for working today, she said, “I’m leaving in five minutes,” and smiled brightly.