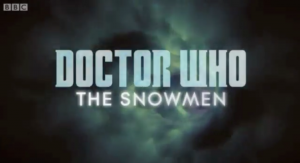 In the long-running BBC show Doctor Who, our eponymous hero flits around time and space curtailing the spread of evil, defending the human race, and according to the first trailer for “The Snowmen,” prevents all the children in the world from ever having bad dreams. But it seems as if he won’t be living up to his responsibilities in the latter task, because if the trailer is anything to go by, some children who watch this are in danger of having nightmares.

It seems that in the 2012 Doctor Who Christmas Special, the Earth is in terrible peril…from snow.

That’s right. The people who made us afraid of statuary (a.k.a. Weeping Angels) are about to make us afraid of the powdery white stuff that will fall with little warning for an entire season. I’m steeling myself for December 25 already.

In addition, we’re getting a Doctor who isn’t his typical happy-go-lucky self. According to a BBC press release, Steven Moffat, Lead Writer and Executive Producer, said: “The Doctor at Christmas is one of my favorite things – but this year it’s different.  He’s lost Amy and Rory to the Weeping Angels, and he’s not in a good place: in fact, he’s Scrooge.  He’s withdrawn from the world and no longer cares what happens to it.  So when all of humanity hangs in the balance, can anyone persuade a tired and heartbroken Doctor that it’s time to return to the good fight.  Enter Jenna-Louise Coleman…”

The BBC have also released a mini prequel to the episode, which re-introduces the characters of Silurian Madame Vastra, human Jenny Flynt, and Sontaran Commander Strax from “A Good Man Goes to War.”

We get an intro in both clips, a few seconds of banter between star Matt Smith and Jenna-Louise Coleman, who plays his upcoming companion, Clara.

Check out the clips for the important stuff: a look at the fabulous Richard E. Grant as the episode’s bad guy and the chemistry between the two actors.