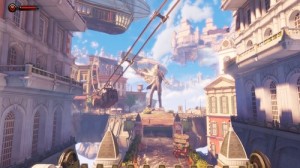 We're not in Rapture anymore.

I soar across the floating city of Columbia in what feels like a gleeful rollercoaster ride, using the skylines that link the collection of buildings together. Below me is a gorgeous neoclassical world peopled with smiling citizens, making it seem as I’m flying over Disneyworld’s Main Street U.S.A. But in short time, I find myself under attack by order of Columbia’s leader, the Prophet, and my attackers include a Robot George Washington. It’s clear fairly early on in BioShock: Infinite: We’re not in Rapture anymore.

As the game progresses, the similarities between Irrational’s games—the Handymen, the authoritarian leader, the gameplay itself—are as striking as the differences.

But the most important difference: Even though I’m halfway through the game as I write this, BioShock: Infinite may be the best game I’ve ever played.

The year is 1912. The place, a floating city that has seceded from the United States. The protagonist, Booker DeWitt, a likable man with a violent past that he is presently failing to escape from. The objective: To clear a gambling debt, Booker must liberate a young woman, Elizabeth, from her captivity in Columbia. But she is held in the very firm clutches of the prophet Zachary Comstock and her monstrous protector, Songbird.

It won’t be easy. Columbia is a city that, despite breaking free from the U.S. of A., is infused with patriotic and religious fervor. George Washington, Thomas Jefferson, and Benjamin Franklin are sacred here…but not Abraham Lincoln, because eff that guy for abolishing slavery.

Meanwhile, Booker is walking around Columbia with two letters, “AD,” scarified onto his hand. And from the warning posters around town, it seems that all citizens should “know the false shepherd by his mark,” meaning the mark “AD.” Glove yourself up, Booker. Don’t say I didn’t warn you.

More on the story in part two of the review.

Booker navigates his way around Columbia with a skyhook, a fabulous method of transportation: Just grab onto a skyline, and suddenly, you’re whisked into the air. Traveling by skyhook is an adventure that can be taken as often as you like.

The skyhook is a spectacular weapon too, especially if you like ripping people’s faces off.

But we need more than a skyhook to get bring Elizabeth back to Earth. Luckily, there are power-ups known as vigors to help us on our murderous way. It’s familiar ground—think plasmids if you’re kicking it old-school BioShock. The Possession vigor is the new Security Command plasmid (but later extends to human enemies); Devil’s Kiss hearkens back to Incinerate; Murder of Crows is just like Insect Swarm, only fowler. You’ll need salts, which replace EVE, to keep up that vigorous use of vigors. And as before, those cigarettes may kill you in the long run, but in the short run, they’re awfully salt-y.

Be warned: There’s no equivalent of BioShock’s ADAM in Columbia; vigors and upgrades are bought with money and can be very, very expensive. While money is easy to get our AD-labeled hand on, it’s rarely found in large amounts. Plus, money also buys weapon upgrades (increased damage, reduced spread, increased clip size, etc). You’ll need to scour every nook to muster up the cash to afford just one vigor upgrade, so think carefully before improving your kill skills.

At least we have a shield to help us, which visually breaks and re-forms like a sheet of glass, plus we acquire items of clothes for those needed boosts, much like the tonics gave us in BioShock.

Combat is fast and furious, especially when we’re outdoors, fighting while riding the skylines. We can pounce down with a killing blow when landing, or we can swoop around the area (think Batman in Arkham Asylum), alternately avoiding and returning fire with police gondolas. BioShock: Infinite is the most fun I’ve ever had in a firefight.

But this is a Bioshock game, and there’s a lot more to Columbia than a scrap or two or twenty. BioShock: Infinite is at its best when we’re exploring the lovely, unlovely world.

Our initial goal is to free Elizabeth from Comstock and Songbird. Fortunately for us, she isn’t a mere quest objective to be picked up and carried from point A to point B. For a non-player character, she’s unexpectedly full of personality, none of it marred by the PTSD that would have invariably struck most of us after being held captive by Songbird all these years.