Doctor Who 7.05: The Clock Winds Down for Amy and Rory 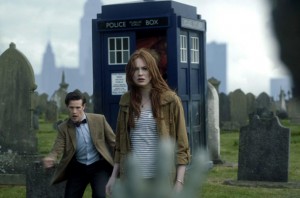 With producer Steven Moffatt, star Matt Smith (the Doctor), and actors Karen Gillan (Amy) and Arthur Darvill (Rory) telling the media for the last several months that the Doctor Who episode “The Angels Take Manhattan” would show deaths of the characters Amy and Rory, I was afraid that the characters would merely appear to die, only to find they had been saved at the “eleventh hour.” But no. The last words of the episode are, “This is the story of Amelia Pond, and this is how it ends.” It was, and it did. It was riveting.

The Doctor, Rory, and Amy are on vacation in Manhattan. The Doctor is reading from a noir mystery book with the last page ripped out, because he hates endings (but not, apparently, foreshadowing). Rory disappears while getting coffee. Soon Amy notices that the pages of the book mention Rory is with River, their adventurous and much-older daughter (see “A Good Man Goes to War” for the story), all the way back in 1938.

The Doctor tries to steer the TARDIS to New Deal Manhattan, but instead they wind up in a “causally linked” cemetery. Amy reads the book, Melody Malone, aloud, but the Doctor begs her to stop, lest anything she reads becomes a fixed point, one that can’t be altered. Amy lets slip that in the future he’s going to break something.

In 1938, Rory appears in front of River. Immediately, the henchmen of evil boss Grayle take Rory hostage (I had to dig deep to find out why: It turns out that Grayle was actually taking River hostage but Rory got in the way). The henchmen soon toss him in a basement; alas, that basement happens to be populated with baby Weeping Angels: Weeping Cherubs. Grayle demands that River, a.k.a. Melody Malone, tell him more about the statue he collected—a statue of a Weeping Angel in chains.

In a “blink,” the Angel grabs hold of River’s arm.

The Doctor and Amy, following a beacon sent by River, arrive at the boss’s estate in the TARDIS, where Grayle passes out from shock. The Doctor and River, who were married in “The Wedding of River Song” don’t have much time together as Amy reads the chapter titles and learns that Rory is in the basement. The Doctor and Amy look for him, but alas, Rory has vanished.

Although the Weeping Angels famously send their victims to the past, this time they sent Rory to a nearby hotel, Winter Quay. (In the prologue, a detective had been sent there before he was zapped into the past by an Evil Statue of Liberty.) River appears, and they’re about to leave together when he realizes that River had broken her wrist trying to escape the Angel.

Fate, whatever it is, is sealed.

Grayle gets zapped by the Angels. In other words, he’s kicked out of the plot as soon as he’s served his purpose.

Rory walks into the hotel, with the Doctor, Amy, and River hot on his heels. They all-too-conveniently wind up in the same room. But they’re not alone. An old man lies in bed, dying. He calls for Amy, and she realizes that this old man is Rory.

“Someone please tell me what is going on,” says Rory. The Doctor responds, “I’m sorry, Rory, but you just died.”

It turns out that by sending people to the past yet keeping them at the hotel, the Angels have been using Winter Quay as a battery farm, to feed off of their victims’ time energy over and over again. And Rory is now fated to die, because he did so only a moment ago.