Doctor Who Producer: ‘Doctor Who Is Bigger Than Carrie Bradshaw’ 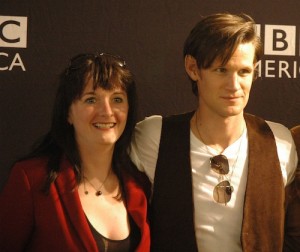 Caroline Skinner, producer of Doctor Who, knows everything there is to know about the upcoming season of the BBC TV show. She was either gracious enough to share some details with me or sadistic enough to torment me by not revealing all. Either way, I know that the next few episodes are what she considers “five big blockbuster movies every week,” and they sound exciting and dramatic (and not here soon enough).

Skinner said, “We’ve got more Daleks than we’ve ever had before. We have dinosaurs on a spaceship. We went to the place where they shot all the Sergio Leone westerns to shoot a western episode. We’ve got the craziest invasion of Earth. And then finally we come right at the end to New York for the final heartbreaking story of Arthur [Darvill, who plays Rory Williams] and Karen [Gillan, who plays Amy Pond], with a whole lot of Weeping Angels.”

The departure of Darvill and Gillan is much on Skinner’s mind. “I don’t think that anybody’s prepared to really get their heads around what it means for Arthur and Karen to not be in the TARDIS with Matt [Smith, who plays the Doctor]. They’re the longest-running companions on the show since it came back when Russell [T. Davies] relaunched it…. You sort of see a really beautiful friendship that’s almost love triangle between the three of them. And I think that in a wonderful way you feel quite familiar and quite comfortable with what kind of a story you’re going to get between Matt, Karen, and Arthur when you watch those episodes.”

However, the TARDIS won’t be empty for long. Jenna-Louise Coleman will fill the role of the Time Lord’s companion starting at Christmas. Skinner said, “Her relationship with Matt is just going to blow everyone away. I’m obviously not going to tell you too much because that would be boring.”

“Boring” isn’t a word that I’ve ever associated with Doctor Who, whose adventures span all of time and space. In fact, even  filming of the show sounds exciting.

When Skinner and Co. came to New York City in April 2012 to film the Doctor Who episode, “The Angels Take Manhattan,” she noticed that perhaps thirty people had come early to watch the shoot. She left and returned several hours later to see that the number had blossomed to “hundreds.” Skinner said, “We worked with these guys who’d been fixers for Sex and the City, NYPD, and various movies, and they were literally saying to us, ‘I just can’t understand it, but this is just the biggest reaction that we’ve ever had.’ And there’s me thinking, ‘Hey, Doctor Who is bigger than Carrie Bradshaw.’”

Doctor Who returns to television on September 1 on BBC/BBC America.