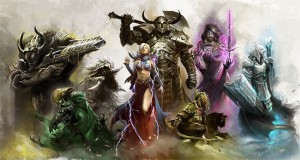 Exploring the world of Tyria isn’t all there is to Guild Wars 2 (GW2)—far from it. In fact, you haven’t played the entire game even if you’ve visited every point on the map. That’s because player vs. player combat, as well as its bigger, angrier cousin, world vs. world combat, is an important part of the game. Also, it’s fun as hell, and I had more fun than I had ever thought I would have.

PvP (or as ArenaNet calls it, “Structured PvP,” to distinguish it from WvW) is like an alternate reality GW2. Even though you have the same character, the same race, class, and basic appearance (and, oddly, your inventory, though you can’t use most of it here. More on this later), you’re automatically leveled up to 80—much like the way you’re calibrated down in lower-level areas in the PvE game. You also get all skills unlocked and one hundred trait points to spend any way you like, no skill books needed.

The good news is, PvP gives you a glimpse into life as a level 80 kill machine. Even if you don’t plan to PvP much, it’s a fascinating way to experiment with possible directions for your character back in Tyria, especially as you can reset your traits whenever you feel like it.

The bad news is that everyone else in PvP is leveled up to 80 too, so every person you encounter is also a kill machine with your face in its crosshairs. But because gameplay is so balanced in GW2, PvP is a test of skill, rather than a test of how good your armor is.

You start the action at the PvP hub, the Heart of the Mists, where you can choose your skills. Then, surprise, you’re automatically given a new outfit. You know that armor and weaponry you spent the last umpteen hours acquiring in PvE? Forget them. Here, you get different armor and weapons, all of which are as powered up as your character. You can acquire alternate clothing and weapons and customize them with different sigils from vendors who will give you any of them for free, and all the options are equivalently powerful. Along with your skills and traits, you can literally spend hours designing what to bring into battle to complement your combat style.

You can reach the PvP hub, the Heart of the Mists, either from Lion’s Arch, or more conveniently, from the PvP button on your hero (“H”) menu. On your first visit, you’re sent to a very basic training area where you learn to revive an ally (if you didn’t already do that in PvE—GW2 makes no assumption that you ever once entered the PvE game) and deal a finishing blow. After that, and on subsequent visits, you’ll go straight to the Heart of the Mists. This offers more extensive training in all areas of combat, from siege weapons to underwater combat, plus vendors, PvP lockers for your PvP armor, weapons, and collectibles, and the two PvP modes on offer:

The PvP Browser gives you access to a list of servers. Choose one and jump into a game with up to sixteen players (eight on a side). (The official GW2 wiki calls it “hot join” though in-game only uses the term “PvP”.)

The Tournament Master gives you access to elimination tournaments. Eight teams (five on a side) are whittled down to one victor in three elimination rounds.

Both modes feature matches on the same maps. But once you’re finished with one hot join game, the maps recycle and repeat. Tournaments have a finite ending.

With tournaments, all eight rosters must be entered before it can start, so tournament can take a while to kick off, which means the “hot join” mode is the quickest way to get into some PvP action. Select a server that’s not already full, and you’ll be dropped into a game that’s currently up and running.