In ‘Borderlands 2′ ‘Wimoweh’ Trailer, No One Sleeps Tonight 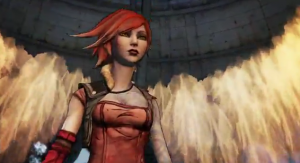 The new Borderlands 2 trailer, “Wimoweh,” is out, and there’s a lot to like, especially if you like your action non-stop and your violence both visceral and cartoony. The trailer gives us that and more.

For people who haven’t played Borderlands (and really, where have you been?), we get a look at a world, Pandora, whose wildlife is more than a bit feisty…much the same as the shark in Jaws, had he come with a few dozen friends. In jetpacks. The first game was mostly a study in brown and umber (and also red, but you had to add that yourself). The sequel, however, is looking a lot more vibrant, as the Lion King music implies in that subtle way Borderlands is so well known for.

For people who have played Borderlands, this trailer screams, “Even more, but better!” Also, is that Lilith (one of the original four playable characters from the first game)? And if so, why does she have glowing wings?

Please tell me that it’s only in the editing, but there wasn’t enough Claptrap. (Claptrap, truly the cowbell of gaming. He’s even shaped a bit like one.)