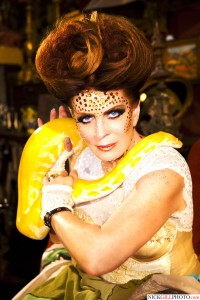 Thirty years ago, actress Joanna Cassidy, who played the replicant Zhora in Blade Runner, was supposed to have had a dancing scene with an artificial snake, but the scene was never shot. Recently, she made up for it by producing her own version of that snake dance, made with director and producer Tamela D’Amico (who had previously directed Cassidy in a web series called Sex Ed).

I spoke with Cassidy and D’Amico about their short video, where I learned more about the scene that never was.

What made you decide to make the video?

Cassidy: I just got to a point where I was thinking the 30th year of Blade Runner was coming up and I just thought, ya know, that dance never got done…and I just thought I think it would be so cool for someone in their 60s to just want to go out and be hip and fun.

D’Amico: When you were shooting [Blade Runner], you thought you were going to film it. You were prepping to film it the entire time. Can you imagine rehearsing through a film schedule, and then you’re told, “Oh no, we’re not actually shooting that.” It’s such a bummer as an actor. I said, “Let’s shoot it.” We wrapped it up in three days. We got a makeup artist who basically took [Cassidy] back in time, that was pretty great. With each little diamond, that took about four hours.

Cassidy: The makeup for the actual performance, just to walk into the room with a snake, that took six hours getting spray-painted and getting these sequins put on my whole body.

Why do you think Blade Runner has such a lasting appeal?

Cassidy: It wasn’t well received in the beginning. People were put off by it. I don’t think they wanted to know that the future was going took like that. And yet there have been sci-fi writers who’ve been predicting this for years, that there would be too many people, that we’d be boxed in like rats.

I was in Japan just three year ago. On the trains along the sides, you’ll see these huge moving billboards, exactly what Ridley did. Ridley really felt [Blade Runner] was in its own way a prediction of the future. And I love that.

Tell me about the original snake dance scene. What was supposed to have happened?

Cassidy: I can’t remember the choreographer’s name now, but he was this beautiful dancer who died several years ago. But we’d been rehearing for at least six or seven weeks during the production, so it was all worked out. Ridley had drawn storyboards, and we were going to do it in an arena in Taffy’s Bar, a snake bar. The seats were going to go up, way way up, and you’d look down on top of this sand dune. The snake and Zhora would emerge at the same time, and the sand would go away, and we would do this very exotic snake dance.

After over six weeks of rehearsal, why was it not filmed?

Everything that Ridley does is complicated. The producers were going, “Oh my god, this is going to add to three weeks to our already overspent production.” Little did they know in time this was going to be a hit, one that gather energy through the years.

To D’Amico: Did you want to film the scene as it was originally written?

D’Amico: I didn’t think I learned the full story of that until we were shooting, and then I was like, “If only I had known…”

I wanted to resurrect her. So this is the Zhora of now. Where does she live? We had her living in this antique store, and she comes to life, and at the end of the video we send her back to where she came from. We never see her after she dies in the movie, so maybe she didn’t really die. So that was my thought process about it. She would be living in this antique shop, unbeknownst to the world.

Zhora and the other Nexus-6 replicants came back to Earth in search of more life. How do you think Zhora wound up in a strip club?

Cassidy: You’re right about them coming back and wanting more life, but they also wanted more humanity. Because Zhora was particularly tough and strong and had a certain look to her, a sensuality, she felt she could maneuver the best through seduction and appealing to that male side of humanity to survive. She needed to make money, so she could get to her friends to go to [Dr. Eldon Tyrell] and ask for more of what they wanted. It’s not like she could go out and get a high-class job. She didn’t have skills. She’s going to go into a place where she knows she can take over.

D’Amico: She was so exposed, you woudn’t think she was a replicant. She was so putting herself out there…

Cassidy: …In her public way. It was a very great disguise.