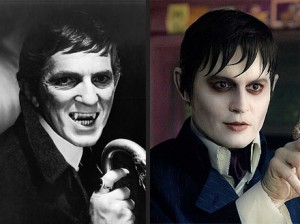 Jonathan Frid, the actor who portrayed vampire Barnabas Collins in the 1966-1971 soap opera Dark Shadows, died on April 13, 2012, at the age of 87. Frid was recently remembered by Johnny Depp, who will put his own spin on Frid’s role as the cursed vampire, in the upcoming movie, Dark Shadows (2012).

According to the L.A. Times, Depp said,

“Jonathan Frid was the reason I used to run home from school to watch ‘Dark Shadows,’” Depp said in an email during a break on the set of Gore Verbinski’s “The Lone Ranger” in Arizona. ”His elegance and grace was an inspiration then and will continue to remain one forever more. When I had the honor to finally meet him … [he] generously passed the torch of Barnabas.”

Scott recalled the moment when Frid and Depp first met on the “Dark Shadows” set: “I won’t ever forget the moment when the two Barnabas Collinses met, one in his late 80s and the other in his mid-40s, each with their wolf’s head canes. Jonathan took his time scrutinizing his successor’s appearance. ‘I see you’ve done the hair,’ Jonathan said to Johnny Depp, ‘but a few more spikes.’ Depp, entirely in character, replied, ‘Yes, we’re doing things a bit differently.’”

After Dark Shadows ended, Frid’s career shifted from television to theater. He appeared in plays such as Arsenic and Old Lace and Mass Appeal. He also wrote and performed one-man shows, such as “Fools & Fiends and “Fridiculousness,” based on his experiences as an actor. Frid reprised his role as Barnabas in a Dark Shadows radio drama by Big Finish, “The Night Whispers.”

We’ll get to see Frid’s last on-screen appearance when Dark Shadows is released on May 11.

But for a look at his first on-screen appearance (as Barnabas, anyway), check this out: