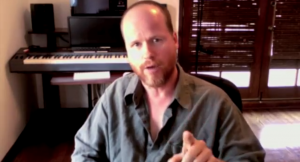 If the name Mike Birbiglia sounds familiar to you, it may be because he’s a frequent contributor to This American Life, a radio show with an estimated 1.7 million listeners weekly. If the name Joss Whedon is familiar to you, it may be because you’ve seen his work in movies, television, comic books, webisodes, and in your very dreams. But Joss’ little movie, The Avengers, which opened at over 4,000 theaters, is currently hovering under 500 screens. On the other hand, Birbiglia’s first movie, Sleepwalk with Me, will be opening at a mere eighty. As Joss put it succinctly, “I’m here to put a stop to this.”

In addition to casting doubt about about the nature of the movie–“It could make fun of the Pope. We don’t know that he doesn’t”–Joss gave us the real reason why we should be boycotting Sleepwalk with Me: “We should be nurturing corporate spectacle, like good Americans.”

Sleepwalk with Me is based on Birbiglia’s one-act play, which in turn is based the his life and sleepwalking problems.

So check out Joss’ plea for a boycott, below, which he has titled, “Whedon to Birbiglia and This American Life: Drop Dead.” And while you’re at it, you might as well see the trailer for the Sleepwalk with Me, below that, to get a sense of what all the fuss is about.

UPDATED: And now Birbiglia, along with his colleague and producer Ira Glass, has responded to Joss. With math. I’ve placed their video below the other two.