Live at the PlayStation 2013 Event (UPDATED) 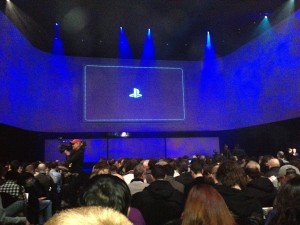 8:03. “We look forward to continuing the conversation.

7:56. There will be PS3 and PS4 versions of Destiny, plus exclusive Destiny content to the PS4.

7:55. [That’s good, but it’s not conquering-the-world good.] Four-player co-op. One couch to rule them all. [Damn you, Metzen, you made me think you’d been developing a completely new property. I’ve been suckered.]

7:53. “I’m very pleased tonight to announce the game that Blizzard entertainment will be bringing to the PS4. Diablo III. It will be available for the PS4 and the PS3.

7:51. STOP THE PRESSES: Chris Metzen, Senior VP of story development for Blizzard is here. “Blizzard and Sony are announcing a strategic partnership through which we will take over the world.”

7:47. Demo is about Chicago, modern day street scene. Ooo, you can tell if someone has been evicted or is an Iraq war veteran. Ooo you can hack his account and take money from a random ATM. And now you can see if you’ve been detected by security cameras. And now you can see a crime taking place. We intervene. And we’re stealthy too. Looks like a cross between Infamous and a stealth game.

7:44. Moran: What’s the next step? Smart cities. Traffic jams, power management, and in Watch Dogs you can control all of it. Everything is connected. And I want you to discover that every_one_ is connected. I want you to invade everyone’s privacy [Wait, did he say that?] Exploring an open world has never been so engaging.

7:41. I have one thing to say of the Luminous engine has announced a new Final Fantasy title. More to come at E3. [FF fans, time to celebrate]

7:38. [Seriously, what an awesome-looking game. And I thought PS3 games looked good. Now PS3 games will feel sadly outdated from now on. Take THAT, the past. The present is here, shoveling dirt on your grave.]

7:32. [DAMN, these faces look good.] “Conquer your fear or die a coward.” The game is Deep Down (working title), developed on Panta Rhei engine.

7:27. Yoshinori Ono, Capcom: Good evening everyone, good morning to people in Japan. It feels good to finally be able to talk about this stuff. The presentation will be now in Japanese as well. [Translator joins him.]

7:26. Partners of the PS4 include: Activision, Capcom, Atlus [arg, too many to write]

7:24. The video we’re about to see was created live with one take. Two clay figures, male and female, are dancing near a guitar. The man picks up the guitar, and we get a mini rock concert as the two people handing the controllers start head banging to the music. Nifty.