One Week Left to Pre-Order Hitman: Absolution and Take the Sniper Challenge 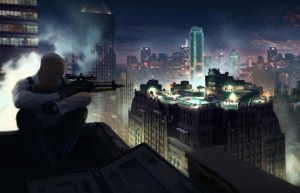 When you preorder Hitman: Absolution you’re not just secure in the knowledge that you’re guaranteed the further adventures of Agent 47 when the game is released on November 20. You also get an instantly playable mini-game called Hitman: Sniper Challenge, which gives you three to four hour’s worth of murder while waiting for the main event. With one week before you can get your hands on Hitman: Absolution, this mini-game may be worth your attention—with one caveat, which I’ll explain below.

You start and finish the challenge on a rooftop in a fixed position with a big-ass sniper rifle. You need to take out Richard Strong, and ideally, his fourteen bodyguards.

Although the main game gives you multiple ways to take down targets, Hitman: Sniper Challenge only lets you snipe. But this mini-game embraces the Hitman ethos by giving you points for headshots, as well as taking out targets such that their bodies are disposed out of sight: off the edge of the building, into a pond, and even down an elevator shaft. But if a body is discovered, everyone flees.

Fail to assassinate Strong, and you fail the mission altogether—no points for you. Otherwise, you score based on how well you did and how many multipliers you previously unlocked.

What multipliers? There are little challenges hidden throughout the mini-game, like an overly-aggressive “Where’s Waldo?”

Shoot all the gnomes (they had it coming) to get one multiplier; shoot all the rubber duckies to get another. Other challenges are, well, challenging. For example, one of them requires you to take out all fifteen targets with nothing but headshots. But the most teeth-gnashingly difficult one, “Fly By Prevention,” involved pigeons, and it came this close to making me crazy. (I suggest you use hair-trigger aim via the shift key, or watching this video here to prevent gamer rage.) Also, don’t bother trying to find Mr. X until you’ve unlocked all the other bonuses first, because he won’t appear until then.

If you want a chance at the big points and your name in lights on the leaderboard, you’ll want to unlock all of the challenges, then start a new a game and take out all the guards and the main target, all with headshots (for the points), and—and this is the part that really requires patience—silently, so you get the “Silent Assassin” x2 bonus. That involves learning all of the guards’ routes, tracking their line of sight, determining all of the places a body can be hidden, and when each and every guard can be taken out without raising the alarm. Total mission time is a maximum of fifteen minutes; but don’t try to complete it in less than seven or eight if you want those bonuses.

After an evening’s rooftop murdersport, I racked up a score a hair under 1.3 million. Not enough to get to make the leaderboard, but not too shabby. It’s good practice for Absolution too, where you’ll be doing much the same careful observation of your targets and their allies.

Speaking of Absolution, the scores you achieve in the sniper challenge boosts your scores in the main game. This is important because your overall score unlocks more abilities for 47 in Absolution, such as increased ammo clip capacity, faster sprinting speed, or longer hair-trigger aim. This is a nice reward for those who pre-purchased, since it gives them a small edge in the game—not enough to unbalance it, but enough to reward gamers willing to put their trust and cash in IO Interactive’s hands. Well played (so to speak).

But for all of this awesomeness, the game left me cold after completing the “Wow!” challenge. The reward for all my hard work? A stripper dressed in a bikini doing the sexydance. Yup, the sexydance. Thumbs down, IO Interactive, thumbs down.

Hitman isn’t Grand Theft Auto. This is a game that rewards finesse. Watching a stripper as a reward for my accomplishments feels as out of place here as parallel parking would be in GTA.

I don’t know how many strippers the developers at IO Interactive have met, but I’ve met one. And she once swore to me that they don’t strip in their off-hours, because that means they’re not getting paid. None of the bodyguards are female either. There’s only one job for a woman in this mini-game, and she’s not even earning from it.

Despite this unfortunate misstep, Sniper Challenge is still an excellent tie-in to the main game, and other publishers could learn from it instead of just handing over unearned game-imbalancing superguns and armor. If you’re still carefully observing your purchase decision from a secure location, you may find Sniper Challenge is a bonus target worth pulling the trigger for.