Really? IGDA Party At GDC Brings On The Female Dancers 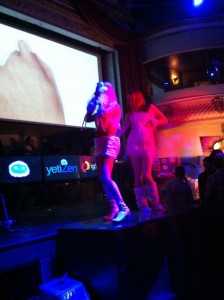 The Game Developer Conference is full of fun, with hands-on demonstrations of unreleased games, talks from the developers, and day-long workshops designed to cram as much information into our game-soaked brains as possible. But not every event is as enjoyable as the others, such the International Game Developer’s Association (IGDA) party last night, attended by industry leaders, industry hopefuls…and scantily clad female dancers.

Student developer Alicia Avril, who attended the party last night, showed me the photo she took and related the tale. On a stage at a crowded industry party, there were “at least three girls in white outfits–one was in a skimpy t-shirt one was in this weird furry get-up–dancing.” Beyond the stage, dancing among the crowd, were women on stilts. “I walked in there not expecting that sort of display.”

According to their website, IGDA is “the largest non-profit membership organization in the world serving all individuals who create video games… The IGDA is dedicated to improving developers’ careers and lives through: Community, Professional Development, and Advocacy.” It seems as if the person who hired the dancers didn’t advocate on behalf of female members as well as he/she should have.

I reached out to IGDA for a comment, and I’m awaiting a response.

Avril said, “Knowing there are such concerned women as members of this group, you’d think that the IGDA would be more thoughtful in their own party and how they’re portraying themselves.”

This isn’t the first time that female dancers were the entertainment at a videogame party (although it will hopefully be the last). When I related the tale of the IO Interactive party, Avril responded, “I know that it’s a part of the games industry and obviously something that needs to be fixed.”

With female dancers attending this function, it makes IGDA look more like a frat house than the voice of an industry. How very disappointing, IGDA.

UPDATE 3/28: To explain the problem with female dancers at an industry party is that these women are on display. Even if they were dancing in a PG-13 manner, they’re still detracting from the purpose of the event: a professional gathering. A few attendees will want to see women dancing, but many are uncomfortable with this. Why throw an industry party where some of your guests feel excluded and uncomfortable?

Worst of all, this is a party for videogame developers. There must be at least one hundred more creative ways to entertain at an IGDA party so that all guests can have fun.

UPDATE: 5:39 pm: IGDA has made an official comment, here.