Review: LEGO Lord of the Rings 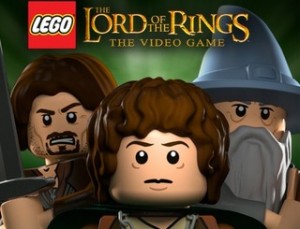 LEGO games have been nothing but fun, and LEGO Lord of the Rings is no exception. It’s not a perfect game, but with adorable characters spouting dialog like, “I can’t carry it for you. But I can carry you” it’s absolutely a great showcase for what makes both LEGO and Lord of the Rings great entertainment. Travellers Tales can be proud of the fact that they released not one but two excellent games in 2012 (this and LEGO Batman 2), games with minor flaws that detract only slightly from a genuinely enjoyable experience.

To help players feel like they’re really in Middle Earth, LEGO Lord of the Rings blends the imagery of the Peter Jackson films with the LEGO look seamlessly. The backgrounds and non-LEGO scenery are visually high quality and work well with the LEGO elements. Not only is this the best looking of all LEGO games, but also it’s full of unexpected nooks and crannies that demand exploration.

As with LEGO Batman 2, LEGO Lord of the Rings is three games in one: in the first game, you play through the story of Lord of the Rings using the characters from the movie; in the second game, you play with any character you’ve already played or have purchased (or “unlocked”); the third game is the open world of Middle Earth, where you can visit any unlocked location on the map for extra challenges and quests.

Assuming you know the story of Lord of the Rings (and if you don’t, I don’t recommend you start with a videogame of it) then the LEGO version is a faithful recreation of the narrative, hitting all the key points in a simplified form. Tom Bombadil is missing, but that’s traditional for all adaptations of the first book. Everyone else is present and correct, including an unexpectedly playable Treebeard, whose orc-stomping level is one of the highlights of the game.

LEGO Lord of the Rings takes advantage of the fact that there are multiple parallel narratives in the book. Once you’ve finished part of the story, you can opt to continue that strand or switch to another one. For example, you can follow Frodo and Sam, or you can take up Aragorn, Gimli, and Legolas.

I played this game on co-op with my husband, and once we finished The Fellowship of the Ring (a.k.a. the first book/film), we found ourselves in different parts of Middle Earth, traveling towards two different plot strands at the same time, picking up random studs and accepting random quests on the way. It was a terrific way to play a game with someone else while not being constrained.

As with every other LEGO game, most characters have special abilities. Gimli can break prescribed areas with his hammer, Legolas can shoot arrows, Gollum can climb special walls (the same mechanic as Robin’s magnet suit from LEGO Batman 2), and Sam has a trowel and the ability to start fires, which means he has the most to do in the earliest levels. (I always did suspect Sam was the true hero all along.)

Soon, Frodo receives a glowing phial to light dark areas, Sam gets a mithril rope, and Aragorn (still not king) acquires Anduril, which can strike glowing black Morgul bricks. As you progress through the game, players can acquire more items, which give them more abilities, which I’ll explain in a minute.

Did I mention quests? Oh yes, indeed. The open world contains several NPCs, who will give you a mission to either fetch or forge them an item. There’s a minor difference between the two:

Fetched items are found in–and only in–the regular levels, and much like the minikits that every LEGO game to date has featured, most can only be retrieved on the free-play mode using characters not available during story mode. (There are three items in each level.) The NPC will helpfully tell you where to find their item, even if some of the rationales lack heft. (A hobbit’s son dropped his toy snake in the Dead Marshes? Why yes, I’d love to go look for it.)

Forged items require you to have mithril bricks, which replace the gold bricks of previous games, as well as a blueprint for the required item. There’s one blueprint in every level too, plus more secreted around Middle Earth. Since you don’t know where any given blueprint is (short of resorting to a walkthrough), trying to complete these quests can be a little frustrating.

When you complete a quest, you earn either a mithril brick, which is sweet, or a red brick, which is sweeter, because they give you multipliers, invulnerability, and other abilities, should you choose to switch them on—but only if you can afford it. You actually need enough studs to use those red brick abilities. In most cases, many, many studs.

Because of the questing, it’s now much harder to acquire red bricks than in predecessor LEGO Batman 2. Whether this is a plus or a minus is up to the individual player. Personally, I felt that it was a bit too easy to get red bricks in Gotham and a bit too hard in LEGO Lord of the Rings.

So overall, yes, these quests are silly, but they lead you across the map, there and back again, where you will encounter more quests, more studs, more adventure…and a replayability that will keep you (and/or a co-op companion) entertained for hours.

Assuming you’ve collected enough mithril bricks, and have the blueprint, you can head back to the forge in Bree and craft the item in an amusing but regrettably unskippable cutscene where the blacksmith will craft your item for you. So if you happen to craft, say, a mithril trowel, and someone has sent you on a quest to retrieve it, you can now go back to the quest requester (<-I dare you to say that ten times fast) and earn your red brick reward. The item then remains in your inventory for you to use at any time.

Several give you the talent of another character. Forge mithril spring boots, and anyone can jump as high as an elf. Mithril boxing gloves turn anyone into a strong character. A mithril “disco” phial lets anyone light up dark caves, which otherwise only Frodo can enter…after he gets the phial in Lothlorien, that is.

I’ll let you discover what the disco part means for yourself.

In free play, you’ll get a selection of characters with the required abilities to access the whole level (more on this later). But giving Gandalf mithril climbing boots to scale walls, and leaving Gollum, behind adds a nice level of levity to the game.

There’s a downside to this awesomeness: If you’re playing in co-op mode and one of you is crafting an item, the crafting cutscene takes over the entire screen. So if the other player was almost but not quite finished with a complex sequence of events, well, there’s nothing you can do but start over…after getting out your frustration on some poor innocent rocks.

To handle all these items, both forged and found, LEGO Lord of the Rings introduces a simple inventory system that allows characters to switch between weapons, collect objects like firewood, and even assemble compound objects like fishing rods. The toolkit, available in the open world and free play, gives you access to all your forged items and their abilities. Thankfully, while every quest giver wants a specific version of an item like a bow, any bow will give you the ability to chuck Legolas and replace him with the more awesome Galadriel.

The inventory system works well enough, but the order seems rather random and unhelpful: It’s frustrating that the objects you’ll want to actually use most often, like the rope, are buried in the stack and not at the top where they’re more quickly accessible. Worse, if you’re playing co-op, the whole inventory won’t fit on the screen, causing you to hunt around scrolling icons.

On the up side, this means accessing the inventory doesn’t interrupt the other player. Unlike forging. [Insert harsh language here.]

LEGO Lord of the Rings looks great, melding the films with LEGO aesthetics remarkably well. The game is filled with trademark LEGO humor but doesn’t detract from the story’s more serious moments.

Ask my husband: I hate reading maps. But the map here is invaluable, especially in the open world. It lists all the quests, mithril bricks, and additional characters you can buy for a stud fee, so you’ll never be stuck wondering what to do next. Unless you like to explore, in which case you can ignore it. This open world game gives you perfect freedom.

In LEGO Batman, I noticed that one player could make off with all the studs while a second player could only watch and wait. LEGO Lord of the Rings, however, does a reasonably good job at keeping both players occupied at the same time.

LEGO Lord of the Rings actually suffers from following the film too closely. In the first scene, we’re thrown into a boss fight, something that new players may find intimidating. (And strangely, I felt I hadn’t “earned” this boss fight.)

Every character in LEGO Lord of the Rings has their own personal inventory. In a large party like the fellowship, it’s difficult to know which character has which widget. For example, I had to scroll through each of my characters’ inventories to see who had picked up a bundle of sticks.

In the open world, every character has access to the main inventory, which include the forged mithril items. As mentioned above, scrolling through this huge list is slightly irritating, especially in co-op, although you do get quicker with time.

Unlike the inventory, both forging AND accessing the map that I love so much while in co-op mode takes over the entire screen. Really, there were multiple times when I called up the map and my husband was in the middle of a timed puzzle, and vice versa, and we had to start over again. It’s annoying as hell. (Co-op players, make sure you tell your partner you need the map before you call it up.)

Some of the boss fights just aren’t that interesting. Mostly, they involve a lot of running around while waiting for the boss to get into a vulnerable state.

Worse, I can’t tell you how frustrating it was to make my way to a dark area only to discover that Gimli was completely useless, and I needed to use Frodo instead. Frodo was half a world away with my co-op partner—unable to proceed because he needed Gimli’s ground-smashing abilities.

It’s expensive to buy characters you meet in the open world, but sometimes useful for their special abilities. One you’ll definitely want as soon as you complete Helm’s Deep is the Beserker (the orc who breached the wall with explosives). His explosives are available to you once you find, defeat, and buy him and are only one of two ways to destroy sparking white blocks (that, and mithril fireworks, for which you’ll need the blueprint and sufficient bricks). This is important, because even in free-play, you won’t be able to destroy those blocks any other way.

I was initially put off by the first scene in LEGO Lord of the Rings, which tossed me into a chaotic boss fight with no lead-in. Later I discovered it’s also a more complicated game and not necessarily more fun because of it. But after a few levels and a few character changes, I was shouting “I am Aragorn, son of Arathorn,” with every swing of my little LEGO blade. I was joyfully caught up in the moment—many moments, actually—and that’s the very reason I game. 8 out of 10.