Scarlett Johansson to Appear in Captain America 2. So Where’s the Black Widow Movie? 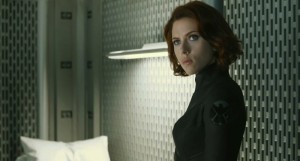 Captain America: The Winter Soldier is in pre-production, and the role of the female lead is currently up in the air. But there’s one woman we definitely know will be making an appearance: Scarlett Johansson will be reprising her role as Natasha Romanoff, a.k.a. Black Widow.

[Black Widow is] not the love interest, though: Five other actresses are testing for that role, including Emilia Clarke from Game of Thrones, Downton Abbey‘s Jessica Brown Findlay, and Alison Brie.

Of course, Black Widow isn’t the love interest, because we know her feelings on the topic: “Love is for children.” However, Steve Rogers, a.k.a. Captain America (Chris Evans), is more romantic than that.

According to IMDB, “[Captain America: The Winter Soldier] will pick-up where The Avengers leaves off, as Steve Rogers continues his affiliation with Nick Fury and S.H.I.E.L.D. and struggles to embrace his role in the modern world.”

(Although the events may pick up where The Avengers leaves off, Captain America: The Winter Soldier won’t be released until 2014…after the Thor: The Dark World, which will be released in 2013. There’s no word on how the events of The Avengers will impact upon the plot of the Thor sequel.)

Natasha was an action heroine who thought and fought her way around The Avengers, and Johansson played her with the right amount of sympathy and dispassion. Unfortunately, taking a lesser role in the continuing adventures of Cap means that Johansson (and Natasha) has yet to earn her own movie.

Johansson is an acclaimed actress. Black Widow has appeared, on and off, in the Marvel Universe since 1970. I’m certain that somewhere Marvel and Disney could find a way to fold a Black Widow movie into the Avengers opus.

Make it happen, someone.