‘Spartan Ops’ Is a Halo TV Series You Can Play 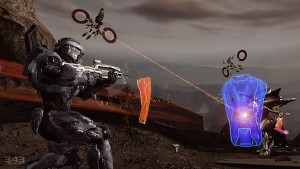 For gamers, November 6 isn’t just Election Day. It’s the day when the Halo Nation get their collective hands on the long-awaited Xbox game, Halo 4. But gamers have even more to look forward to than the continuing adventures of the Master Chief and his ethereal AI sidekick, Cortana. 343 Industries will also be releasing the first segment of Spartan Ops, one of ten “episodic co-op adventures” (like a TV series but streamed via your Xbox).

The episode sets the context for a gameplay mission. In other words, after you watch the episode, you can actually play it to continue the plot of the episode you’ve just seen.

But you don’t just play one adventure per episode. You play five. According to 343 franchise development director Frank O’Connor, “Each week, we’ll introduce five [emphasis mine] 10 to 15-minute missions that continue the story of the UNSC Infinity.”

That’s a whole lot of Covenant-killing action—and that’s in addition to Halo 4. (Spartan Ops is free with the purchase of the game, although Halo 4 will set you back $59.99 or $99.99 for the limited edition.)

Even though Spartan Ops will be released the same day as Halo 4, Spartan Ops is actually a sequel to the main game. But rather than further the storyline of the Master Chief, the series will follow two Spartan squads, Crimson and Majestic. That way, Spartan Ops will keep spoilers to a minimum. O’Connor, however, offered tantalizing tidbits:

“The story of the UNSC Infinity intersects with the Halo 4 campaign, but continues on through Spartan Ops after the events of Halo 4. The UNSC Infinity plays an important role in Master Chief’s adventure, and while Spartan Ops is separate from Halo 4’s campaign, don’t be surprised if you periodically cross paths with the Chief.

“In the first episode, you’re going to find the Covenant is doing an archeological dig and has discovered an ancient artifact. You don’t know what it is, but the Covenant wants it, so that’s good enough for you.”

The “you” O’Connor refers to is a Spartan supersoldier (either male or female, your choice) that you can personalize with “a new armor modification system that introduces gameplay-enhancing customizations for the first time in a Halo game.” As you progress through the game, you unlock more, presumably more awesome, gear.

You can go it alone, but O’Connor said that single-player gameplay will be difficult. However, Spartan Ops supports “matchmaking,” that is, the game “will find you three other players at the same state of the series as you are, so you can play it together and hopefully make some new friends.” (And everybody needs friends who would kill for you, even virtually.)

Will any familiar voice actors make an audial appearance? O’Connor said, “We have a couple of actors in the game we haven’t announced. It’s not a star vehicle, but there are great journeymen character actors in the series.”

But are these daily episodic missions really only fifteen minutes each? “The gameplay is as long as your friends are cooperating,” said O’Connor.