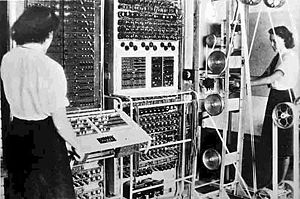 Although the NMOC rebuilt Colossus in 2007, the museum itself needs more cash to grow its new gallery, for all of us Nazi-hating computerphiles who want a glimpse of history. This is where you come in:

Both community and commerce are encouraged to play their part in helping tell the story of one of the great achievements of the twentieth century. Individuals and small companies can also make modest and publicly acknowledged donations by sponsoring virtual Colossus valves….

That’s right, sponsoring a valve, a.k.a. vacuum tube. As tech historians know, Colossus ran on valves and gas tubes, called thyratrons. (This was back in the day when computer bugs were actual insects.) And for a minimum of £10, you can sponsor your own virtual one at www.colossusonline.org. Your or your company’s name, along with your URL, will be viewed on the Colossus website.

Best of all, asking the public to sponsor a valve is far more interesting than a polite request for donations. It’s the NMOC’s way of saying, “Help us restore the machine that let us KICK NAZI ASS.”

Of course, that would sound much better than “sponsor a valve.”

Colossus predated Eniac (previously thought to be the world’s first computer) by two years, but its existence was classified by the UK’s Ministry of Defence. There’s currently a push to recreate Charles Babbage’s Difference Engine as well.