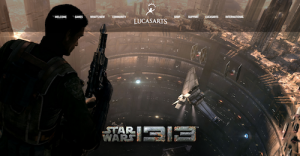 Ask any fan of Star Wars: There’s a new Moff in town. Although Disney acquired LucasArts on October 30, 2012, Disney has made some sweeping changes gradually, such as cancelling the long-running Cartoon Network television show, The Clone Wars, as well as the upcoming live-action comedy Detours in mid March. Now, after over five months, Disney executed Order 66 on their recently acquired videogames studio, LucasArts, and its 150 employees.

This has been sad news for fans of Star Wars TV, but it’s even worse for fans of videogames, who had been anticipating the tactical game Star Wars: First Assault, as well as Star Wars 1313, a third-person action adventure that would have been a darker, grittier look at the universe that gave us Ewoks. But all is not lost.

According to Wired, LucasArts wrote,

“After evaluating our position in the games market, we’ve decided to shift LucasArts from an internal development to a licensing model, minimizing the company’s risk while achieving a broader portfolio of quality Star Wars games…. As a result of this change, we’ve had layoffs across the organization.”

Disney will be licensing out the Star Wars property to other companies…much as LucasArts did with Knights of the Old Republic 1 & 2 (Bioware and Obsidian), LEGO Star Wars (Traveller’s Tales), the currently running MMO The Old Republic (Bioware), and others.

In fact, as many have been quick to point out, the last game of note that LucasArts had published was 2008’s The Force Unleashed (which I loved), and their last game proper was Star Wars Kinect (which I laughed at). LucasArts, however, will always be revered for many of its past works, including Grim Fandango and the Monkey Island series.

There is also a precedent for Disney licensing their videogames. Disney Interactive Studios, Disney’s games development arm, already has farmed out the development of games based on their properties; for example, THQ produced Disney Princess: Enchanting Storybooks for the Nintendo DS in 2011.

This is not the first time the Mouse has cleaned house. Disney Interactive Studios, acquired then shuttered Propaganda Games (Tron Evolution) and Black Rock Studio (Split/Second). It also closed Junction Point (Epic Mickey 1 and 2) this January, after purchasing it in 2007.

It’s a pity Disney hasn’t folded some of these 150 developers into its own Disney Interactive Studios—and after all, Star Wars is undeniably Disney—given the buzz surrounding 1313. But Disney seems to be applying the Sith Rule of Two to the Star Wars universe: Only two may there be. For now it seems to be the film sequels…and perhaps the live-action TV show tentatively titled Star Wars: Underworld.

As to the development of 1313 and First Assault, always in motion is the future.

Kotaku has a bad feeling about this:

Our source says Lucas has pursued the option for “one or both games,” but nothing happened. “With the teams now basically being dispersed I think both games are effectively dead forever,” our source said.

A second source also told Kotaku this afternoon that the chances of Lucas licensing out 1313are very slim. The odds are “effectively zero,” the source said.

Whereas Game Informer suggests there is another hope. They quote an unnamed Disney executive as saying:

[W]e are looking for proven external partners who can help us provide video games to our fans. We still believe in the video game industry, we still will provide Star Wars games, we’re just looking at different models rather than internal production.

I reached to Disney as well, and I’m awaiting their response. But if they read this, they’ll know that I, and fans like me, have seen the trailer for 1313 and have been strongly anticipating this grim world lightened only by a blast of blasters. I sincerely hope this game moves forward, all the way to my PC.

As to the 150 developers who lost their jobs, my best wishes, and I look forward to seeing your work in a galaxy right here, sometime very soon. Click for full photo gallery: Star Wars Through The Ages