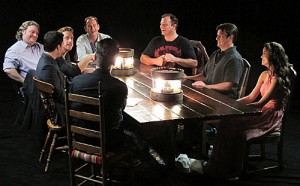 You know that Firefly: Browncoats Unite special on November 11, where most of the cast reunited to talk all things ‘Verse? Not only was it a great little special but also it seems that Firefly lit up the Science Channel’s ratings.

According to a press release, “Firefly [was] the network’s most-watched Sunday night ever among P25-54. FIREFLY: BROWNCOATS UNITE garnered 1.2 million unique viewers across the evening and was the network’s second-highest-rated telecast of 2012 among P25-54 and M25-54.”

The Science Channel’s love for Firefly continues. In addition to clips of the show, they’ve posted three deleted scenes. (Although they can also be found on YouTube, those clips are of middling quality.) Two seem to have taken place in the original pilot, “Serenity.” In the first, Mal and Zoe have survived the Battle of Serenity Valley–barely; in the second, my favorite, Simon learns more about the origin of the ship’s name while Zoe gives him some insight into Mal’s past.

A third clip is from “Our Mrs. Reynolds,” which guest starred the lovely Christina Hendricks as Mal’s bride. In it, River comes across even more Riveresque than usual.

Again, in case you hadn’t seen it, the Science Channel has also posted an outtake from Browncoats Unite. Nathan Fillion talks, to the amusement of his peers, about his nude scene in the episode “Trash.”

Thank you, Science Channel, for not stopping the signal.

Check out the deleted scenes, here.