‘To the Delight of Fanboys,’ Damon Lindelof Not Writing Prometheus Sequel 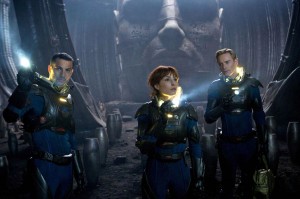 Good news, Prometheus haters. Damon Lindelof, who rewrote the screenplay to Prometheus and many say was responsible for the critical failure of the film, will not be involved in the—wait for it—prequel’s sequel.

Lidelof told Collider, “[I]t was a dream come true to work with [Ridley Scott]. But much to the delight of all the fanboys, I don’t see myself being involved in Prometheus-er.”

The screenplay was originally written by Jon Spaihts, and according to the LA Times, Prometheus began as two movies. It was ultimately condensed into one by Lindelof. Although it’s hard to determine who was at fault for Prometheus’ flaws, much of Prometheus’ lack of forward momentum—the story is more concerned with questions than with answers yet manages to suffer from an appalling lack of scientific curiosity–points to Lindelof’s writing.

As we know, Lindelof was the co-creator and showrunner of Lost, a show that spent six years piling questions upon mysteries upon puzzles, and only occasionally delivered (debatably relevant) answers. Lost, though, doesn’t pretend to be science fiction, and the Alien universe is–or was until Prometheus–one of the hardest science fiction backgrounds on the screen.

As a fangirl, I will admit that I am delighted that Lindelof has recused himself from the sequel. I’ll even volunteer to review the script, as almost any fan could have repaired at least some most egregious flaws even without extensive rewrites. I’d start with making the scientists care about science.

But the question remains to whomever writes Prometheus 2: How strong a film can it be, standing on the shoulders of its prequel? It’s hard to steal the fire that’s already gone out.