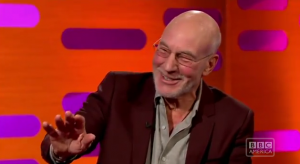 Patrick Stewart and Liam Neeson know that they’ll be forever haunted by their former characters, Captain Jean-Luc Picard from Star Trek: The Next Generation and Qui-Gon Jinn in Star Wars: The Phantom Menace, respectively. We know they know. And BBC TV host Graham Norton knows we know they know. But it doesn’t stop him from making them squirm.

In this video, Norton pits a Qui-Gon action figure against a Captain Picard action figure. It’s pretty clear from the get-go who wins, but it doesn’t make this any less entertaining. Check it out.