Why ‘Aliens: Colonial Marines’ Is a Better Bad Game than ‘Star Trek’ 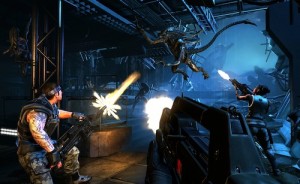 And the winner is…not us.

But first, I didn’t think that A:CM was bad: I thought it was a good game with flaws. However, I’m one of the few, and I acknowledge that most gamers had extremely poor experiences. I’ll be taking their thoughts into consideration here.

– Both games pay homage to their source material, but A:CM wins out

A:CM uses a digital version of the locations found in Aliens, including the colony of Hadley’s Hope and the ship Sulaco. Although it adds new locations, the bulk of the game is familiar to fans of the movie.

In terms of recognition of Star Trek locations, the engine room is criminally absent, and we spend too much time in the uninteresting hanger. The locations we love such as the bridge of the Enterprise and the transportation room are used only briefly…and since it’s the reboot universe, it’s not even that familiar.

Although all the locations in the ship are considered canon—Brian Miller, senior VP and games producer of Paramount Pictures told me, “We have access to everything that was made in the film because we made the film”—the 2009 Star Trek movie never spent much time in the corridors and turboshafts that appear in great length in the game. Paramount may have poured interesting details into Star Trek, but gamers would be more impressed if they had seen the movie first and recognized the minutiae.

(That said, we may see more of these sets in the upcoming movie, Star Trek Into Darkness.)

– Star Trek had more ambitious co-op play, but didn’t live up to its promise

Star Trek had such incredible potential for co-op play: With two main characters who elicit different responses from different NPCs and have separate tasks to accomplish, I thought this game was going to take co-op play and make it its bitch. Plus, you could play co-op with an online buddy or a real-life buddy—an option I absolutely adore.

My hopes were dashed fairly quickly. Because we never spoke to anyone who wasn’t a member of the bridge crew, the unique interactions I was hoping for never came into play. Co-op partners didn’t seem to help each other any more than the NPC version of the game.

Worse, Kirk and Spock are effectively interchangeable. If you were expecting—quite reasonably—that Spock’s Vulcan nerve pinch would be a special move for that character…nope. Kirk can knock out a stunned opponent equally well. Granted, the marines in A:CM are interchangeable too, but we expect that—with the exception of Bishop, naturally.

Had Star Trek’s co-op play worked seamlessly, A:CM would still have been superior: In A:CM, my online co-op partners (up to three) could drop in at any time, in any level. In Star Trek, my buddy and I could only hook up at checkpoints.

– Both games are shooters, but only in A:CM does this fit the setting

Both Star Trek and A:CM are co-op shooters, largely consisting of getting from point A to point B (then C, then D, etc.) with buddies in tow while clearing each section of each level of antagonists.

Some would say that Kirk and Spock mowing down waves of enemies just isn’t what Star Trek is about. I argue that it almost works here…with an important caveat. Yes, Star Trek isn’t about fighting, but it is about camaraderie. Kirk and Spock killing all of lizard-kind doesn’t work; killing all of lizard-kind together makes sense. But Star Trek is also about exploration and discovery, and the few times I was able to scan objects, I received basic information and nothing else. This is a game that cries out for more puzzle elements.

Of course, pitilessly razing enemies (and death by cranial excavation) is exactly what a game featuring space marines should be about, and A:CM delivers on that front just fine.

Neither game breaks the mold in terms of gameplay, but A:CM plays better and, though it doesn’t attempt to exceed them, delivers on its core expectations. It was still fun to play through, while Star Trek was more of an endurance test to get to the next piece of plot. Star Trek does have some flashes of originality, like the scenes with the teleport gun, but they’re all too brief.