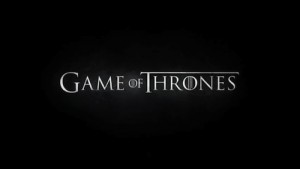 Game of Thrones the fantastic HBO series based on George R.R. Martin’s continuing saga, A Song of Ice and Fire, has recently won six Creative Arts Emmy Awards, the Emmy awards designed to honor the people who work behind the camera–such as casting directors and sound editors–rather than in front of it.

Makeup for a single-camera series (non-prosthetic). Episode: “The Old Gods and the New”

Many characters in this episode were covered in several layers of grime, and even the typically regal Catelyn Stark looked less than perfect—which WAS perfect, considering she spent the episode in a battle encampment. Also, the makeup artists were able to use their imaginations in this episode when Joffrey was hit in the face with cow dung.

Outstanding costumes for a series. Episode: “The Prince of Winterfell”

“The Prince of Winterfell” had a great many extras, particularly in Winterfell, which had been captured by the men of the Iron Islands. All of them required the right clothing to look properly dirty, hungry, and ready for a fight.

Outstanding art direction for a single-camera series: Episodes: “Garden of Bones” / “The Ghost of Harranhal” / “A Man Without Honor”

I’m not sure why Gemma Jackson, Frank Walsh and Tina Jones won an award for these three episodes in particular. Perhaps it’s because in “Garden of Bones” we get our first glimpse of the magnificent city of Qarth; in “The Ghost of Harranhal” we get to see the wildfire that Cersei has been stockpiling. Regardless, the look of the television series captures the books perfectly.