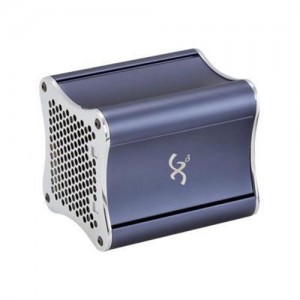 Last week, I speculated that the SHIELD was not only a new gaming system but also the probable first part of a two-part sortie against the incumbent console platforms. The more I think about it, the more I think that NVIDIA and Valve may be attempting to deliver a two-punch knockout that could clean the clocks of Sony, Microsoft, and Nintendo.

But not in quite the way you, or more importantly, the incumbents, might be expecting. Let me elaborate.

When you hear the word “NVIDIA,” you typically think of the maker of many fine graphics processing units. (You may even say its name as a purposeful whisper, as the NVIDIA logo does at the start of many games: “NVIDIAaaa!”) But NVIDIA, which doesn’t traditionally make end-user hardware, is more typically the supplier of chips in other people’s hardware. NVIDIA also produces a reference design for GPU releases and their variants, and third-party OEMs such as Sapphire, Gigabyte, MSI, or Asus produce their own versions of the cards for the end consumer.

It’s possible NVIDIA want to play a different game with SHIELD and be the sole manufacturer; there’s no evidence thus far that they have talked to OEMs about the SHIELD. But if past performance suggests future direction, it seems more likely the California-based company will take the same route and offer the Tegra 4-based SHIELD as a product that is also a reference design. That is, plenty of third-party OEMs should be able to make a SHIELD-like controller that supports the streaming feature from NVIDIA’s GPUs, so long as there’s a Tegra 4 SoC (“system on a chip”) inside.

In an interview with The Verge, Gabe Newell stated that Valve will bring out and sell its own box, but expects other manufacturers to jump in.

“Go ahead. You can always sell the Best box, and those are just whatever those guys want to manufacture. [Valve’s position is]: let’s build a thing that’s quiet and focuses on high performance and quiet and appropriate form factors.…We’ll come out with our own and we’ll sell it to consumers by ourselves. That’ll be a Linux box, [and] if you want to install Windows you can. We’re not going to make it hard. This is not some locked box by any stretch of the imagination.”

(We know that Valve invested in Xi3, a company that builds modular and extremely cute PCs like the Xi3 “Piston” [<--I see what you did there, "Valve"], showcased in Valve’s booth at CES last week. Valve could use this as the basis for piles of Valve-branded consoles. And note: Xi3 have a range of modular computers of varying power and capabilities.)

So that’s the plan, I’m speculating: All of the OEM manufacturers can take a piece of the hardware pie, both controllers and Steam Box “consoles.” Meanwhile, the Steam store, with its community-driven Workshop and Greenlight sections, gives developers of any size an attractive and affordable on-ramp to place their wares in the public eye mostly free of platform-imposed restrictions.

This would be a big deal, because up until now all of the gaming consoles on the market have been closed systems. You can make and sell a controller (if licensed, of course), but you can’t make and sell compatible console hardware; only the likes of Microsoft, Nintendo, and Sony can do that.

Gamers have become used to a business model where the next challenger in the console wars is always another console. That may no longer be the case: The next challenger is not a console but an open platform anyone can build a console for. That’s a totally different proposition, one the existing platforms have never encountered before. And it’s growing out of a platform that already has over 50 million existing users.

Of course there are legitimate criticisms of this plan, if a plan it is. For one, consoles have the edge over PCs because they have predictable hardware capabilities and not the diversity of different configurations Steam users have. But that 50 million figure suggests Valve already has experience in managing a diverse ecosystem, and it hasn’t slowed them down yet. Steam Box consoles just add a few more data points.

Then there’s the fact the Steam Box will run Linux, which many games don’t support. But Valve can hardly be ignorant of this problem, especially when you consider that the Linux versions of their games, Team Fortress 2 and Left 4 Dead, are available on Steam. (Quite possibly Valve could choose to use open-source Windows-compatibility projects like Wine to help more games make the jump—tricky on general terms, but an easier proposition if you have a Steam Box specification and a working relationship with the developers.)

This scenario is about as far away from the walled gardens of the Xbox, PlayStation, and Wii as it’s possible to get and still be in the same business.

This represents a potentially huge shift in the way the games industry both makes and sells games. It’s all the benefits of the PC as an open platform, rendered in console form. Alongside Steam Boxes, any new PC or laptop with NVIDIA’s latest GPU could also be on the guest list. I can even see existing desktop PCs joining the SHIELD party with an upgrade in their GPU.

I haven’t even mentioned NVIDIA’s Grid cloud gaming platform, whose relation to all of this is also ripe for speculation. Games played from the Grid would use the SHEILD’s streaming feature to play games anywhere there’s reasonable bandwidth.

Which games? We don’t know, yet…but how about syncing up your Steam games collection: a “Steam Match” feature, a la iTunes Match? Since Steam handles saving game progress to the cloud—for games that support it—your game progress could sync up and down between your home PC or Steam Box and the Grid seamlessly. In the time it takes you to get up from the couch, leave the house, and flip open your SHIELD from the passenger seat of the family car, the game’s saved, synced, and read to stream.