Mark Hamill recalls his emotional return to the Millennium Falcon on the set of Star Wars: The Last Jedi 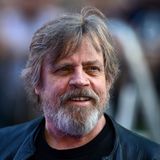 If you’ve ever played Dragon Age and said, “Wait, I know that voice from somewhere,” then yes. Yes, you do.

The circle is now complete. When Luke and Yoda trained, Luke was but the learner. Now, he is the master.