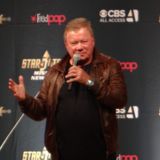 William Shatner got a life. It’s a life filled with Star Trek. What do you get when you cross Classic Star Trek and the Next Generation? A lot of great lines.

Celebrity photos aren’t cheap, but these fans got more than their money’s worth.

6 Fun Facts About Leonard Nimoy on His 81st Birthday

When Leonard Nimoy dies (hopefully in the very far distant future), he’ll have the words “I Was Spock,” written on his grave. That’s because he’s known worldwide and beyond as the logical pointy-eared Vulcan from Star Trek. But even his many fans, some of whom can tell you that Spock’s blood type is T-Negative, might not know much about the actor who plays him.

The Priceline Negotiator, who showed his audience how to save up to 60% on name-your-own-price travel deals, recently died while rescuing a bus filled with potential customers. His last words were, “Save yourselves…some money.” He was 5 years old.