Video Games May Enhance Skills Beyond a Superb Double Jump 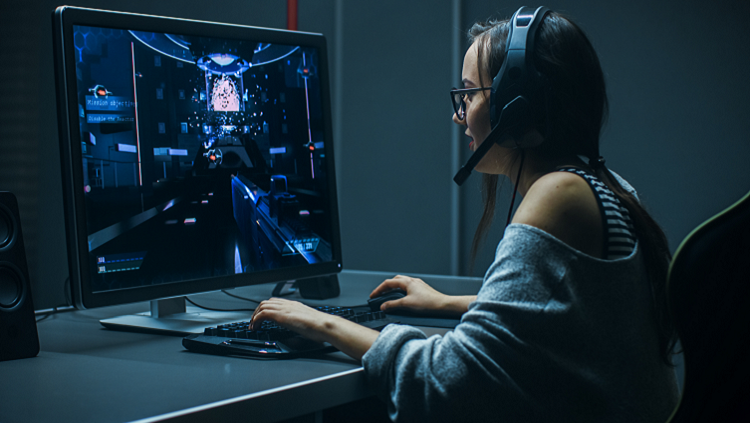 The staccato shots of gunfire erupt before you see your enemy. The music builds, your heartbeat rises, and you select your weapon, perhaps a shotgun, a sniper rifle, an AK-47, or even a Molotov cocktail. You and your allies leave the safety of the base, uncertain if the player next to you will survive or end up as another corpse you step over toward victory.

Surviving your enemy requires quickness and agility: jump to avoid fire and take a shot in mid-air or dodge behind the corner of an abandoned building and rethink your strategy. Once under cover, you only have seconds to get a good line of sight on your foe, be it a plainclothes terrorist or camo-clad combatant. Even if you eliminate your target in a spray of blood, you still need to keep your guard up. You might miss that one enemy hidden on the roof with sights set on you.

Stepping into the world of a first-person video game like Counter-Strike: Global Offensive is immersive. You view the game’s landscape through your character’s eyes. As a first-person shooter, or FPS, it also means you’re in the gunner’s seat. Your perspective peers down the length of a barrel, lining up the perfect shot, or watching helplessly as an opponent blasts you out of the match, spewing blood on the screen as though it were on your face.

FPS’s provide experiences that feel immediate and interactive, but they also may offer benefits for your brain like increased hand-eye coordination and visual perception skills. And, these cognitive changes may last long after the glaring “game over” message on your screen.

It’s not surprising that an FPS game could help your brain, says Emiliano Santarnecchi, a former competitive Counter-Strike player who now serves as assistant professor of Neurology at Harvard Medical School in Boston. “During an online match, you make dozens of decisions in a fraction of a second, all requiring high levels of attention, flexibility, and fine visuomotor skills.”

Santarnecchi and his colleagues explored how those games might be helping the brain in a small study of twenty-nine participants who played Counter-Strike: Global Offensive for thirty hours, in daily sessions of two hours each. The participants agreed to MRI brain scans before they played, immediately afterward, and then three months after the end of the experiment.

For approximately 80 percent of participants, those scans showed increased thickness in specific regions of the brain utilized in game-playing, such as the sensory cortex, where the perception of our bodies is stored; the parahippocampal place area, our internal map; and the left lingual gyrus, where we process vision.

“[Playing Counter-Strike] increased the strength and thickness of these regions and the connection between them in a way to cope with new learning,” Santarnecchi says. After all, a high-octane game like Counter-Strike is a mental workout. Expert players can jump, and while in mid-air hit another player who is also in motion. “It’s an unbelievable act of visuomotor coordination, cognitive flexibility, and decision making, a bit like trying to play chess while riding a bicycle in a traffic jam.”

Santarnecchi was surprised by the long-lasting effects of the game, however. “You still see the results of the training three months after in terms of brain structure and cognitive function in around 80 percent of participants,” he notes. “That tells you something about how powerful these video games are.”

The investigators are currently reaching out to the study’s participants to see if they are willing to have another MRI scan to determine if the changes are present in the brain a full year later.

While these players are without question becoming experts at Counter-Strike, Santarnecchi says video game skills may potentially transfer from the game to other cognitive functions in the here and now. In a 2009 study, Swedish researchers asked whether systematic video game training could enhance surgeons’ performance on a virtual reality endoscopic surgical simulation. The researchers divided participants into three different groups. The first group received five weeks of training with the FPS game Half-Life, which makes large demands on visual-spatial skills. The second group spent five weeks working with Chessmaster, a game with high cognitive demands but which requires minimal visual-spatial acuity. The third group did no video game training at all.

When put to the test in a virtual reality endoscopic surgical simulator, surgeons who had played Half-Life performed better than both the surgeons who played Chessmaster and those who completed no video game training.

Santarnecchi has a hunch that Counter-Strike’s adrenaline-fueled pace may be responsible for the brain changes his team observed, “[FPS’] are very fast-paced and fun to play, inducing a state of high clarity and focus. The literature about learning suggests that ‘gamification’ of any training regime makes the training more engaging and thus significantly more effective. This applies, for instance, to cognitive rehabilitation programs for patients as well, and in the case of FPS the players are voluntarily putting themselves through a high-density, highly specialized training regime by playing for many hours every day. Their brain inevitably changes.”

However, Amanda Pasinski, adjunct professor of psychology at the University of Nevada, Las Vegas, isn’t so sure. Pasinski points out that all the participants in Santarnecchi’s study were active video game players, some of whom already possessed thicker-than-average left lingual gyri.

“It may be that people with larger left lingual gyri are better at these games, and get better at them faster, which makes them want to play more. While it’s difficult to find participants with no action video game experience, it may be that these cortical changes don’t occur as strongly in the general population. I think this is a great study; we just need more studies like it to see if this is a real effect,” she says.

Santarnecchi isn’t so quick to discount the increased size of the lingual gyri in his study because while some participants had beefier gyri to begin with, they still showed an increased volume from baseline. That said, he agrees. “It is true that we are still far away from having a complete understanding of how the brain adapts to novel stimuli…. [L]ong-term effects on cognitive functions and brain processes we haven’t measured in the study might exist and should be carefully evaluated in the future.”

That means for researchers, more exploration is needed; it’s time to get their game on.