5 Business Lessons to Learn from Mario and Donkey Kong 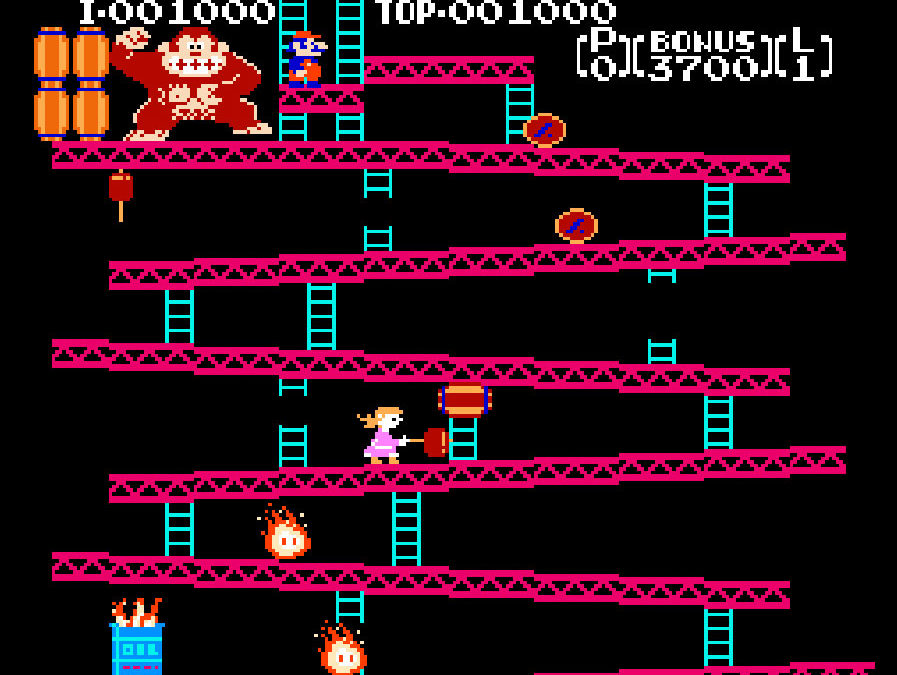 I hear you laughing, and I understand your mirth. After all, Donkey Kong ruled childhood back when mullets were a reasonable fashion choice. But if you spent as much time and money in the arcade as I did, you’ll know that there’s more to Donkey Kong than just a videogame… because realizing anything less means you’re admitting you wasted your youth.

Also, the franchise is worth $10 billion. Still laughing?

Get your quarters ready.

Back when arcades were in fashion, you couldn’t just bring your leet gaming skills—and not just because “leet” wasn’t gamer slang back then. You also had to bring along quarters for the machines. Players would place the quarters on the bottom of the screen, as a way to claim the next space the moment the current player went down.

If you planned a long session of Donkey Kong, you’d line up your own quarters, so no one else would cut in to your concentrated gaming time. But the more you played—and the more you spent—the sharper your skills.

You don’t need a videogame to tell you: You gotta pay to play…and you gotta pay to work, too. Managers expect employees to have innovative ideas and the wherewithal to produce them. But inventive ideas require a budget, extra employees, and basic encouragement. And though it seems counterintuitive, your hires need these resources before a process has been proven.

A good leader recognizes when a project looks promising but needs more assets to succeed. If your team can develop a proof of concept that looks workable, don’t hoard your game quarters. Spend them to help your stakeholders achieve a high score. You know how it takes money to make money? The same is true of your quarterly budget.

Fun Fact: Mario wasn’t actually a plumber in Donkey Kong; fitting in with the construction theme, he was a carpenter. He switched to plumbing in the 1983 game, Mario Bros.

What do you get when a single ape is placed in front of an infinite number of barrels? Don’t expect the works of Shakespeare. When it comes to Donkey Kong, you get an opportunity to see just how good you are at leaping. One failure to launch into a perfectly timed hop results in the barrel roll of death.

Just when you’ve mastered jumping, Mario has to face great balls of fire and jumping death springs. That’s a lot of adversary for one Italian to handle. And just when he manages to survive the otherdeathtraps, the barrels start to roll again.

It’s almost as if the barrel were some sort of metaphor….

You know what that barrel Donkey Kong keeps tossing at us actually is? That barrel is risk.

Every moving hazard is a threat. That’s equally true for both amateur steeplejacks and for managers, whether in startups or established multinationals. If you’re going to succeed, you’re going to have to accept there is some risk—and some chance of failure.

With experience and timing, you can anticipate a lot of those risks (say, the way your team responds to a crisis) and avoid them. If you’re a pro, you can make it look like there is no risk at all.

If you’re lucky enough to have people in your company who make risk-filled work look effortless, don’t mistake this for the job being easy. Sometimes the job is hard, and your people are that good. Make sure before you reward them before they look for their next princess in another castle.

Fun fact: There’s a Pauline edition, created by a programmer for his young daughter, who wanted to play as Pauline and rescue Mario.

(You can do it yourself, too. Read the description notes.)

Keep your eyes on the prize.

Although we tend to associate mustachioed Mario with Princess Peach, it turns out that in Donkey Kong, his first ladylove was Pauline. To reach her, Mario had to leap tall barrels in a single bound, not to mention confronting an ape-beast more than twice his size. You climbed and leapt, steadily onward, until you finally reached her.

For your efforts, you were rewarded with her heartfelt regards, in the form of a giant heart.

Would you have worked your way up levels of broken girders, leaping over flaming instant death, just for the heck of it? Of course not! Pauline was in peril! (Side note: After Mario defeats Kong, the two are united, and their love lasts forever. Or until 1985, when he meets Princess Peach.)

It’s the same in your workplace. Although it seems as if there’s nothing but danger in your path (or at least a lot of overtime) keeping your eyes on the prize makes the onerous tasks worth tasking.

Success begins with setting goals. But just because you have a clear goal doesn’t mean you have only one way to reach it. You have to plan your route, and also be prepared to change direction and try a different ladder if the need arises.

However, you can’t focus on reaching your goals to the mono-minded exclusion of reason and sense. Sands can shift on a daily basis, and what made sense for your team before you landed that contract, or after some onerous budgetary constraints, may mean your project needs a tweak or even a complete point-by-point reevaluation.

Single-minded focus on goals can lead many a business into an untimely demise through cranial barrelus interuptus.

Fun fact: Donkey Kong has a kill screen. On the second girder at level 22, you die suddenly, even without a barrel nearby. What matters to players is the score you get before you die.

Someone is always trying to beat your high score.

Have you seen the documentary, The King of Kong: A Fistful of Quarters? It’s about a man, Steve Wiebe, trying to wrest the title of highest-scoring player in Donkey Kong away from reigning champion Billy Mitchell. (And if you haven’t seen this epic real-world tale, you should get on that ASAP.)

Mitchell had won multiple videogame championships and was known as the player to beat. He was frequently challenged—and he challenged back. Since the documentary was made, Mitchell has reclaimed, and lost, the title to Steve Weibe. At the time of writing, the current champ is Hank Chien, with a high score of 1,068,000.

You don’t pause just because you reached the top of the level. Sure, it’s a good moment to congratulate yourself (and your team), but the canny leader knows that finishing one business goal just means it’s time to start planning for the next. If you don’t, a rival is waiting for her chance to get there first.

Take Apple Inc. as an example. Apple released an iPod, then a music store, then the iPod mini, the iPod shuffle, and so on. And just when you thought the iPod couldn’t get any cooler, we met the iPhone. Apple Inc. and companies like it are always innovating—even when they’re first on the leaderboard.

Why is that? Because there’s no such thing as “done.”

Rivals always present challenges. It’s up to you to meet them. A leader at any position needs to keep his eye to the competition. Although a manager may just think about delivering this project, if you’re a leader, you need to think beyond the scope of the cubicle.

Besides, there’s nothing quite as galvanizing as competition, whether it’s a high score in an arcade or a new product.

In 1981, Nintendo had struggled to sell the arcade game Radar Scope to the American market. With 2,000 unsold cabinets, the head of Nintendo America decided to convert the game for the current cabinets. Shigeru Miyamoto was tapped to develop his Popeye/Bluto/Olive Oyl analogy. Two years later, Donkey Kong had earned Nintendo $280 million in 1983 dollars.

You would think with all that money lying around, Nintendo would be able to afford to create a different character to play Mario’s younger brother Luigi in Mario Bros. You would be wrong. Although money wasn’t an issue, memory capacity was. Nintendo had to re-use Mario’s assets to create Luigi—who was differentiated only by a palette swap.

As Nintendo learned, you have to work with what you have. And sometimes all you have are limited resources and deadlines.

What Nintendo teaches us

Nintendo, a company that started off manufacturing playing cards in 1889, is a master of business flexibility. When presented with a business problem, the company didn’t throw in the towel. Theyrethought their strategy and changed the game. Literally.

Nintendo showed us that strategic reuse of assets is a tried and true business solution, with the benefit of shorter development lifecycles and reduced development cost. Managers need to decide which assets need further retooling.

Good leaders know that rethinking aspects of the problem can act as a springboard to a new solution, one that’s even more successful.

At least it worked for Donkey Kong.

Fun fact: In Donkey Kong, Mario’s name was Jumpman… which was still better than his original concept name, Mr. Video.