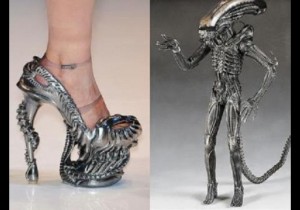 One of the reasons the Alien franchise, which kicked off in 1979 with Ridley Scott’s horror film, Alien, was so popular is because of the alien itself, an organic kill-machine that was both horrifying and mesmerizing to watch. This xenomorph is unmistakably the work of H.R. Giger, a Swiss artist, whose work has been described as “biomechanical.” I’ve found a few biomechanical-inspired items, some done by the artist himself. A few of these are cute as heck, while others may give you nightmares.

You can see some of Giger’s most recent murals in the upcoming movie Prometheus.