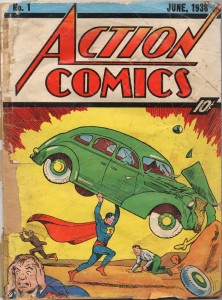 Money doesn’t grow on trees. Money doesn’t fall from the sky. Money doesn’t come in a pot at the end of the rainbow. But for people like David Gonzalez, money comes in unexpected places…and in unexpected forms. Within the walls of an abandoned house he had recently purchased and was in the process of remodeling, Gonzalez found an issue of Action Comics #1.

According to the Star Tribune, Gonzalez said, “I knew it was worth money. But I had no idea how much.”

Action Comics #1 featured the first appearance of Superman. The Golden-Age Man of Steel is comparably rusty next to modern-day Supes: He can leap tall buildings, but you won’t believe this man could fly. But he did usher in the age of the superhero all by his superself.

Action Comics #1 is considered the most valuable comic book in history, and one well-preserved copy sold at auction for $2.16 million. The second most valuable comic book, Detective Comics #27, featuring Batman’s first appearance, sold at an auction for $1,075,500. And The Walking Dead #1, first published in 2003, has been selling extremely well, considering its relative youth: A recent eBay auction earned the seller of this issue $10,500.

At the time of this writing, Gonzalez’ Action auction (found at ComicsConnect) is at $127,000, although the price is expected to go higher. However, because of its poor condition—it rates a 1.5 by the Certified Guaranty Company—the issue isn’t expected to break any records.

But Gonzalez didn’t expect to find a comic book worth more than a house, either.

For those of you who want to read the issue but can’t spare the $100+ large, you can do what I did: Buy a reprint.

That way, you can watch your friends’ jaws drop in shock when you tell them you own a copy of Action Comics #1. Trust me, it never gets old.

Thanks to Steven Ryan and Cary Gillenwater.