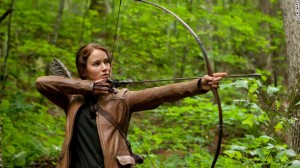 Although I enjoyed the film The Hunger Games, I have a friend who hated it so much that it made him “want to gnaw both my legs off.” The movie left him with more questions than it answered—questions that I didn’t have, because I had read the novel by Suzanne Collins first. (For the record, I prefer the novel.)

Then I wondered, how many others were similarly confused? So I took my friend’s questions and answered them. I’m sharing them with you, below. In fact, if you have other questions, please let me know. I have the book right here.

I do agree that many of these questions could have been eliminated with one line of dialog at the right moment—a victim of a plot tightened too much for action, perhaps. (It will be interesting to see if there are any deleted scenes that fill in some of these answers when the film arrives on DVD.)

Why were the tributes working together when the object of the Hunger Games is to kill everyone?

Districts 1, 2, and 4 have “career tributes,” known as “Careers.” They’re trained their entire lives to fight in the Hunger Games, and for them, it’s an honor to be picked. The Careers naturally band together, even in the cafeteria before the games begin.

Why did they let Peeta join their pack?

The Careers were jealous that Katniss scored an 11 in her pre-game rating—the highest of all the tributes. They let Peeta live because they believe he has information to help them get to her.

Why does Katniss blow up the food supply?

Why weren’t the sponsors, actually, ya know, sponsoring?

Katniss’ mentor, Haymitch, recruited sponsors for her, and their gift of burn cream likely saved her leg. But when the gifts arrived, they came with a note from Haymitch, not from the actual sponsors. You would think that if you were spending money on a life-saving gift, in a show that was watched by all 12 districts, you would want your name emblazoned on the cannister for all to see.

So, yeah, it’s true we didn’t see sponsors in the movie, but we don’t really see them in the book either. I imagine the sponsors were shown in the commercial breaks in the actual footage.