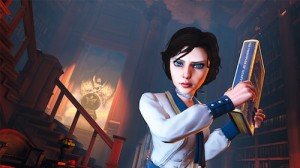 You're going to do _what_ without me?

BioShock: Infinite was a perfectly wrapped package of a story—one that used threads of the previous two games as its bow. I’ve already speculated about DLC options, here. But those were thought experiments, and until just now, it never hit me that the DLC could exclude one of my all-time favorite game characters, Elizabeth. But it seems my unimaginable may be real. According to Eurogamer, a 2K artist is creating an all-new companion character.

According to Eurogamer, a sharp-eyed reader of LinkedIn noticed an artist’s profile gave it away:

The artist’s CV noted that he’s been “providing animation and R&D for a new AI companion character” in Infinite. [Editor’s note: This has since been removed.]

In between calming deep breaths, I have to remind myself that DLC featuring the Luteces would be a great deal of fun, and learning more about Lady Comstock would be great, and hey, Gambling Booker could be Gangs of New York cool.

But a large part of me is hoping that the main character of Irrational Games‘ upcoming DLC is Elizabeth…and the new companion character is her ammo-tossing sidekick.