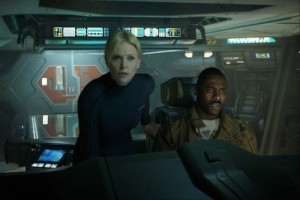 What do Men in Black III and Prometheus have in common, besides the fact that they’re the latest installments in their own popular science fiction series? They’re both cooking up viral advertising campaigns, with a dash of alternate reality gaming, to spread the news, “We’re here, we’re in your blogosphere.” But they’re going about it in two distinctly different ways.

MiB3’s advertisers have created a website called The Men in Black Suits Are Real. Visitors to this website will meet a 14-year-old conspiracy theorist, Bugeyes126, who sets about proving that aliens and their black-suited handlers exist. Posts include links to real-world sites, like Seattle news site King5.com, and an unsolved mathematical formula.

SuperheroHype also spotted Bugeyes126’s phone number, where you can leave messages describing your alien encounters. Presumably, any messages you leave could be used to further the MiB3 advertising campaign.

If MiB3’s advertisers update the site with any regularity, The Men in Black Suits site could be an entertaining place to past the time until the movie’s May 25th release date.

Meanwhile, Vincent Puren, marketing manager of TransmediaLab, promised on Twitter that Prometheus’ fake TED video was “only a beginning” of a longer and presumably more intriguing campaign. (Of course, I can’t imagine anything more spectacular than a fake TED presentation.)

But as any Advertising 101 student can tell you, social networks play a key role in viral marketing, and TransmediaLab is sticking to the textbook: It turns out that if you want to subscribe to Weyland’s “newsletter,” you can only do it via Twitter or Facebook.

Some of you, however, might not like the terms and conditions: Before installing the app, you have to give Weyland (a.k.a. Fox Filmed Entertainment) permission to cull your friend’s list, update your profile, and post for you—a loss of control over your account that is yet more proof that Weyland is an evil company.