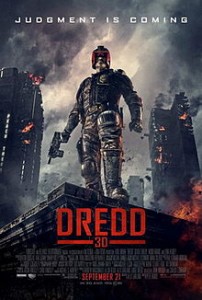 In the most recent commercial for Dredd 3D, the upcoming Lionsgate film to be released in the United States on September 21, 2012, we get some style and substance, a taste of what we hopefully have ahead of us. But there was something important left out of this 30-second trailer. The title card reads, “Based on the legendary comic book”…but it doesn’t actually mention the comic book’s name.

Of course, the snub isn’t completely unexpected. After all, how many Americans recognize the title of a British comic book? (I and several of my friends do, but we’re not typical.) But there’s one potential reason why 2000 AD doesn’t have the same name recognition as other comic book titles:

My comic shop sells me each issue of 2000 AD for $5 each. But 2000 AD is a weekly comic book, which means I shell out $20 a month for this title. And as many Americans could pay $3.99 for an issue of a typical American comic book, and you’ll see why many  aren’t flocking to the British title.

It’s a shame too, because 2000 AD has some of the best writing in comic books, alternately brutal, hilarious, adventurous, and thoughtful. You should check it out.

And while you’re at it, check out the trailer: