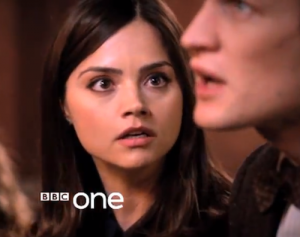 As we know from season 6 of Doctor Who, the oldest question in the universe, the one that can never be answered, is…“Doctor who?” But the second half of season 7 has a different question that needs answering, and this question remains something of a mystery to the famously curious Doctor: Who is Clara Oswald?

If you’ve been following Doctor Who, you’ll know that the time-traveling Time Lord has met Clara not once but twice, the first in the distant future (“Asylum of the Daleks”) and the second in Victorian London (“The Snowmen”). And at the end of “The Snowmen,” we briefly meet a third, modern-day version of the same woman.

The trailer, below, focuses on the question that will obviously be the focus of the rest of season 7, who—or what—is she? Is she a Time Lord herself? Is she a shape-shifter? The reigning theory at Geek Native is that she’s the Doctor’s daughter, Jenny, who was first and last seen in a 2008 episode.

I really enjoy Geek Native’s notion that she could be a lure created to reel the Doctor in. But to reel him in where? Perhaps to the Fields of Trenzelor, where “the fall of the 11th” takes place.

Of course, I have my own theory who Clara is. She’s a character in the upcoming BBC America TV show, Orphan Black.

Check out the trailer: