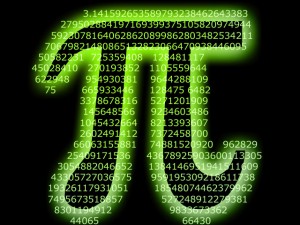 Today is March 14 (3.14), known to geeky people everywhere as “Pi Day.” As we remember from high school math, pi is a mathematical constant that describes the circumference of a circle, divided by its diameter. And Pi Day is an excuse to flaunt our geekiness.

But there are other ways in which we can celebrate Pi Day. For example…

As I said above, pi is an irrational number, but what does “irrational number” mean anyway? Simply put, it’s a number that can’t be expressed as a simple fraction. Pi has been calculated to 10 trillion digits, and the numbers still don’t repeat (something to do with it being “transcendental”).

Some people, such as Marc Umile, like to test their mental prowess by memorizing pi. Umile, a medicare biller, memorized pi to 15,314 digits.

Not all of us are that dedicated. But spend a few seconds today memorizing pi to ten digits. It’s a simple way to get your geek cred on.

Even non-mathletes (like me) can try our hand at less complex problems, like calculating the tip at a restaurant without a calculator.