3 Dystopian Futures Women Could Face Thanks to Rick Santorum 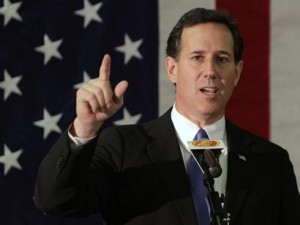 Of all the Republican candidates for president, Rick Santorum is the only one who makes me want to fling a copy of Betty Friedan’s The Feminine Mystique at his head. Although he’s the darling of conservative women, his views on women’s equality, below, are about as quaint and old-fashioned as scurvy and lynching—not to mention bewildering, repulsive, and out of place in 21st century America. It seems Santorum wants to put us in a time machine and send us on a one-way trip to the 1950s, when men were men and women were girls.

Speaking of time machines, what does science fiction have to say about Santorum’s platform? Quite a bit, as it happens. One of the roles of the genre is to comment on the present by extrapolating the future. And science fiction has already inferred some unpleasant scenarios…based on Santorum’s own words.

For the purposes of this article I’m using examples from TV and film. However, literary science fiction has a long history with examining the roles of gender in the future. For example, read Ursula Le Guin’s The Left Hand of Darkness, Joanna Russ’ “When It Changed,” and almost anything by the fabulous Sherri Tepper.

The Washington Post quoted Santorum’s book, It Takes a Family: Conservatism and the Common Good, on the topic of working women:

Here we can thank the influence of radical feminism, one of the core philosophies of the village elders [his term for liberal elites]. It’s ironic. Radical feminists have been making the pitch that justice demands that men and women be given equal opportunity to make it to the top.

From this quote, Rick Santorum suggests that equality in the workplace has been brought about by “radical feminists.” This implies that Santorum believes America would be happy without equality, if it weren’t for those meddling ovulators.

In the very last episode of Star Trek, we meet Dr. Janice Lester, an old flame of Captain Kirk. And it turns out she wants to get into his pants, literally: she switches bodies with him in order to become a captain. Although Lester’s ambition burned as brightly as Kirk’s, in Starfleet (as envisioned in 1969), women cannot become captains.

A friend of mine pointed out that Starfleet may have placed a glass ceiling over her head because Lester was actually a bug-eyed lunatic. But I argue that she was driven insane by being denied career advancement again and again while watching swaggering tin-plated dictators with delusions of godhood like Kirk win accolades, promotions, and command of a starship.

Forced to seek advancement elsewhere, Lester earned her doctorate and became an archaeologist, where she discovered her body-switching machine, along with a powerful thirst for revenge.