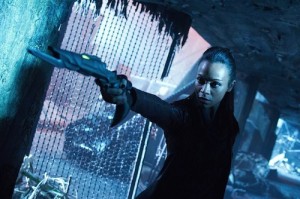 Star Trek Into Darkness won’t be beaming into our theaters until May 17—which makes this the perfect time for Paramount to tease us with three “Disruption” trailers. Instead of the good space-faring fun of the other clips that have recently been released, these clips are far more dark. It shows Starfleet’s new nemesis coolly analyze Captain Kirk, first officer Spock, and  communications officer Uhura for weaknesses that he intends to exploit.

Benedict Cumberbatch, who plays the bad guy in question, describes Kirk and Spock’s obvious character flaws. But interestingly, he also turns his gaze on Uhura, rather than the obvious more obvious partner in their exploits, Dr. McCoy. This makes me believe that actress Zoe Saldana’s role as the minidressed lieutenant will be beefed up:

In the previous film, Star Trek , we saw Uhura was a competent officer who happened to have a romantic interest. But in the rebooted film, Kirk and Spock were the main characters, and all of the supporting characters (McCoy, Sulu, Chekov, Scotty, and Uhura) shared scenes with them. The fact that the evil-doer’s attention is focused on Uhura leads me to suspect that she’s as important as Kirk and Spock.

Either that, or he only singled her out because her attachment to Spock makes her vulnerable. And it seems that Cumberbatch’s character loves that in a potential victim.

Star Trek Into Darkness has a budget of $185 million, higher than its prequel film, which was made for $140 million. Worldwide, the Star Trek reboot earned $385 million. Cumulatively, the reboot plus the previous ten Star Trek movies have earned over $1 billion.

Variety predicts that Star Trek Into Darkness will earn $85 million in its opening weekend. But its overall earnings may be affected by competition from summer superhero movies such as Iron Man 3, The Wolverine, and Man of Steel.