3 Subtle Changes to the ‘Game of Thrones’ Season 2 Intro 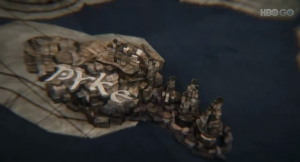 Game of Thrones fans who were glued to HBO for its season 2 premiere were greeted with new developments on old characters and intrigues. We also saw that our familiar, sweeping intro—for which film company Elastic won the Creative Arts Emmy Award in 2011—had some minor modifications. Although at first glance it resembles the season 1 opener, the changes are obvious to those with a sharp (some may say “overly picky”) eye for detail.

Below, I’ve added the intro to both seasons, so you can compare them for yourselves. But in case you were wondering about the specifics, here are three differences to look out for when episode 2.02 appears on Sunday, April 8.

In season 1, Peter Dinklage was the last actor named in the credits. Now his name has been brought to the fore, the one formerly occupied by Sean Bean (may his character rest in peace).

As a matter of fact, Dinklage isn’t the only actor to have moved up one step in rank: Lena Headley, who plays the conniving Cersei, now gets the second billing, a position formerly occupied by Mark Addy (may his character rest in peace).

(Note: I had wondered if Dinklage’s Outstanding Supporting Actor Emmy award had anything to do with the position of his name on the credits. However, Elizabeth Moseley, the director of Theatrical & Television Contracts at SAG-AFTRA, told me that an award doesn’t guarantee top billing. Moseley said the credits are “negotiated between the performer or performer’s representative and the producing company.”)

2. More locations in the title sequence.

As we know from the first season, the title sequence changed depending on the locations found in the episode, a neat bit of slight-of-hand that had me confused until I figured it out. For example, the Eyrie appears in four episodes and the Twins only one. In the first episode of season 2, “The North Remembers,” we were introduced to Dragonstone. And in the upcoming episode, “The Night Lands,” we get to see Pyke, a castle on the Iron Islands.

I’m not much of a music person, but even I noticed that strings are more prominent in this season, and the drums sit in the background, whereas the drums were more noticeable in the first season. Also, the timing has slowed a little, perhaps to accommodate the new visuals.

I don’t really know much about the language of music, but it seems that in the second season, the person bowing the cello is taking longer strokes with the bow. (If there’s a word for that, please let me know in the comments.)

See and hear it for yourselves: