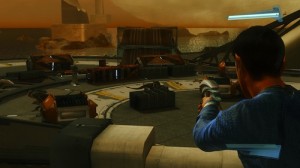 When trying to complete the game in single-player, after a co-op session where I joined my buddy’s game, I continued…and discovered that I was tossed back several chapters. Specifically, I found myself at the point in the game where my friend had gotten to when I first joined him. Not only have I lost my single-player progression, I don’t even have the progress from my co-op play. I tried to jump forward using “chapter selection,” but nope. I’m still out several hours worth of single-player progress.

There was one wonderful moment in the Star Trek videogame on the bridge of the Enterprise. Kirk has a decision to make, one that will affect the entire crew, and all eyes are upon him. And as he makes his decision, it becomes clear that Kirk had made the best yet unexpected choice. It was a brief moment, but it was full of tension.

The voice acting is spot-on in this two-player co-op game. Captain Kirk’s dialog is chummy and irreverent, and Mister Spock’s lines are perfectly Spock. The other members of the crew are well handled. The music worked.

There was one level that could have been fun had the graphics been up for it: a weightless environment where Kirk and Spock don gravity boots and walk on the many different surfaces they’re teleported to. (Think M.C. Escher’s “Relativity.”) It wasn’t as stunning and surreal as it could have been, though the idea was good.

But the game, which is set between the 2009 movie and its upcoming sequel, is a failure. I can’t tell you how disappointed I am, considering I had a glimpse of the game and thought the two-player asymmetrical co-op was going to be innovative. I thought Kirk and Spock’s different dialog responses and hoped-for different abilities would have raised the bar for intelligent, interesting gameplay.

Paramount said it had taken three years to develop this game. But what we received was so buggy it was a veritable roach motel.

I couldn’t complete it, so I don’t feel comfortable assigning it a numbered review.

But I’m more than comfortable sharing a list of temporary yet plentiful glitches. All of these glitches were verified by a co-op partner.

(Note: My PS3 version was mysteriously lost in the mail, so this review was done on a PC. I chose to play Spock.)

1. I saw Spock’s eyeballs from the inside. (Really.) I saw this at GDC too, but I was assured it would be fixed in the final release. Not so much.

2. I could shoot enemies without them reacting. I repeatedly walked up to Gorn and shot them. In the face. Another time, I shoot a row of enemies one by one. None of them reacted or turned hostile when being hit or even notice their reptilian pals dying next to them.

3. I saw a Gorn jump into a fire and die. At least he noticed me.

4. While playing this on a PC and using a keyboard and mouse, the in-game hints only showed me controller buttons.

5. On Steam, I was eventually able to join a friend’s co-op game (co-op was initially totally inoperable). They were not able to join mine.

6. Watching my co-op partner stop-motion jerk across the room, then run on the spot without any real-world motion, was hilariously bad.

7. I got stuck in tricorder mode, a blue-and-white grid pattern that made me feel like I was transported into Tron’s Grid universe (which would have been an awesome crossover game, had it been intentional).

8. My phaser disappeared. Despite its sad case of invisibility, it worked fine.

9. Large Gorn would hide behind tiny objects, which defeats the purpose of hiding. I can see your tail. And your head.

10. Another Gorn vanished into a wall. Better yet, a tricorder scan of the area revealed the Gorn was stuck inside it.

11. I couldn’t climb atop a small box, but I could jump onto a higher one next to it.

12. At one point, I walked forward and suddenly…died. Just. Freakin’. Died.