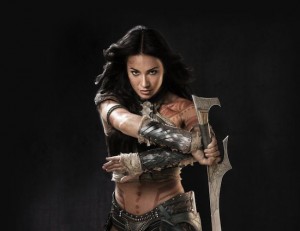 As a fan of both the Edgar Rice Burroughs book, A Princess of Mars, and of Andrew Stanton, who directed WALL-E, I wasn’t really that surprised that John Carter would turn out to be an entertaining adventure. (And my fellow Forbes bloggers agree, here and here.) But in some ways, the movie exceeded my expectations, and it absolutely deserves to be seen by more people than it has. So I’d like to convince you to see John Carter, particularly while it’s still in theaters. Here’s why:

– The movie is never stupid. I had secretly feared that John Carter would have been dumbed down for its audience. In fact, the opposite happened. Unfamiliar names like “Barsoom,” Jeddak,” and “Zodanga,” are used in casual conversation, and the movie never treated the audience as if it couldn’t keep up.

Although the film missed an opportunity to expand on the book’s ecological issues—Barsoom (a.k.a. Mars) needs to constantly replenish its water and air supplies—it added a layer of complexity with the character of Matai Shang (Mark Strong). His character gives the movie an interesting twist, one that I didn’t expect.

– It’s more complex than the pulp adventures that it pays homage to (or rather, the pulp adventures that it inspired). In the beginning, we see John Carter weave his way through 1880s New York City in order to send a message to his nephew. It seemed like a wasted scene…but there are no wasted scenes here. In fact, at 132 minutes, I would swear the movie was too short.

– Lynn Collins, who played the princess of Mars, Dejah Thoris, was positively luminous, and I believe that Collins’ Dejah was one of the better female characters in science fiction film. A scholar and a kicker of much Zodangan ass, I believed both her intelligence and her strength.

In fact, I liked Collins so much that I may have to watch her in movies that have (gulp) absolutely nothing to do with science fiction.

– As we left the theater my husband commented that John Carter felt like Avatar, with much of the same kind of action, But unlike Avatar, John Carter has characters you actually cared about in a plot that makes sense. (I arrived home and saw that E.D. Kain drew his own comparison.)

So if you’ve seen Avatar (and who hasn’t?) and found it unsatisfying despite its breathtaking beauty, you should absolutely see John Carter: it’s the film that Avatar aspired to be but failed.