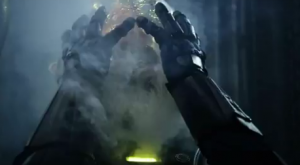 Is this a face hug?

My colleague Mark Hughes recently wrote that Prometheus, the upcoming film directed by Ridley Scott, is one of the must-see movies of the year. But after seeing the most recent trailer, I think Prometheus is the must-see movie of the year—so much so that I’m going to have to avoid crossing major intersections, showering, playing with firearms, and huffing carbon monoxide until its June 8 release date.

And it’s all because of the trailer, below. Here’s why:

The many, many references to Alien.

Who’d have thought that seeing flashes of a biomechanically ridged platform and a man clawing at his faceplate would fill me with nostalgia and anticipation? But it does, because I’m a xenomorph-aphile, and I’ve been waiting for a good continuation of the Alien series since Alien 3 couldn’t live up to the standards set by Ridley Scott and James Cameron (Aliens, 1986). (Still, it didn’t stop me from seeing the less-acclaimed Alien movies, up to and including Aliens vs. Predator 2.)

But wait, there’s more: Life-support pods. A stressed woman on the prowl in her underthings. Even sticky, gooey secretions. Many memorable moments from Alien have found their way into the trailer, including the technology, except here we’re getting the more polished, 21st century version of the tech used in the first two Alien movies. It’s like the future designed by Steve Jobs, if Steve Jobs were evil.

Sadly, the one thing we don’t get is the xenomorph itself.

From the IMDB page, we know the basic plot of Prometheus: “A team of explorers discover a clue to the origins of mankind on Earth, leading them on a journey to the darkest corners of the universe.” The trailer gives us so much more.

Our first sense of story starts with Charlie Holloway (Logan Marshall-Green) explaining to a small crowd, “These are ancient civilizations separated by centuries and yet the same pictogram was discovered in every one of them.” Our characters are about to solve a mystery—an ancient one.

Soon, Noomi Rapace’s character, Elizabeth Shaw, says, “I think they want us to come and find them.” So it’s not just a mystery…it’s a galaxy-wide hunt.

But then she says, “We were so wrong.”